Enclosed you will find a cheque and receipt from Uncle Julius Rowe which came here the day after you left. It was forwarded from Hickory and I was afraid it might go astray if I rewrote Hickory and returned it. So I opened the letter and am sending the contents in this letter. I suppose you reached Mr. [?] today and as you expect to be there about a week you will probably receive this before you leave. I trust you made the long trip without mishap, annoyance or trouble and have reached your destination in safety. We missed you and Pearl very much after your departure. Bonnie declared that Friday was the longest day she ever spent in her life and she says nothing has tasted good to her yet since you left. Carolus also seemed to miss his grandmother and Aunt Pearl too. He could scarcely get over talking about your going on the zug and every time he would hear the train blow he would say “Grandma coning on the zug”. When he went to bed Friday night he said. “Kiss Grandma” and then he though a little and said “Grandma gone”. But he is now fast becoming accustomed to the change and seems about as happy as ever. Little Herman too seemed to be quite lone-

some for a couple days and manifested it vigorously after his own quaint fashion, but he is fast developing again into a model baby. We all enjoyed your visit so such, only we found it so short. I suppose such would have been the case had your visit been protracted to twice as long. We have had a couple good rains since you left and everything is looking pretty and green again. It rained here all day Friday or Saturday and we had a little again last night, though today is nice and bright. Friday night Mr. Abraham Ernst took seriously ill with kidney trouble and has been very low ever since. I was down to see him Saturday afternoon, Saturday night last night, and this morning. Last night they did not expect him to live till morning and I gave him the communion and prepared him for the end. But this morning I am happy to say he appeared much better and I have faint hope for his recovery. His wife and small children were away at Halifax when he took sick but returned Saturday afternoon as did also Mr. and Mrs. Theakston. Mr. Ernst made his will on Saturday, a matter which he had put off and which must have been very trying to him in his weak condition. All the children that could be reached were notified and will perhaps be coming on. The doctor had given him up entirely and the Halifax specialist who came up in his automobile expressed very little hope for his recovery, but he may get over it “for all”.

His illness has been almost the sole topic of conversation in the village for the past few days. Everybody seems to be interested and concerned for his recovery. He has had such attacks before, but this is the worst he has ever had. It came on suddenly almost without warning. If he should die, he would be missed more than any half dozen men in this place. But we prayed for him in Church and Sunday School yesterday and it may be that the Lord will yet spare him. I had a pretty hard day of it yesterday. I preached three different sermons. The extra sermon was necessary on account of conditions at Farmville. A couple fanatics were around Blockhouse about two years ago and they made one or two converts who of late have been engaged in pernicious activity around Farmville and I found it necessary to offset their activity and if possible [?] their influence. I preached from Acts 20:29-31 one of the most forcible sermons I ever preached and I imagine it made quite a sensation as those who were doing the mischief were present. I know from remarks afterwards that the sermon made a profound impression and trust that it will do good. Father DeLong was down to see his bride Saturday evening. They took tea with us last evening and were over at our Church last night. Mrs. Ha[?] came down and Bonnie went with them. The boys’ grandfather gave them each a dollar for their bank. Carolus now has $20 and Herman $14. Their combined wealth is almost equal to their daddy’s.

Father DeLong is going back this afternoon. I haven’t seen or heard from Dr. Yourt since you left, but his lecture here is set for Tuesday night i.e. tomorrow night. We are anticipating a treat. He preached for Pastor Weaver yesterday. The Nova Scotia Lutheran came out this morning. I was not aware that this number completed my four years of my editorship or I would have put my resignation a month earlier and allowed the new editor to begin with the fifth year. Maybe I can arrange it yet. The Wentzel Lake affair is now drawing close at hand. I hope we will have favourable weather and a record breaking crowd and that there will be a good fund in it for the Orphans’ House. Next Sunday I will exchange with my curate Mr. George Shirley and go down to Chester in order to administer the communion and baptize a child or so. My garden is progressing nicely. One tomato is all but ripe and others are on the verge of ripening and my cucumbers are becoming so productive that we can hardly keep them picked off fast enough. We have been giving away quite a few. A card came the other day for Pearl from Pauline Weller, which we will forward. Mrs. Willis Ernst apologised for not leaving the address of Mrs.Theakston here. She said she misunderstood and thought that Pearl was to call for it. I wrote to Mabel the day you and Pearl left, notifying her of your departure. Write as soon as you can and tell us about your trip. With love from all of us, I am Most Sincerely yours,

Note on side of letter:

The Photos have not come yet. When they do we will send your bunch to Hickory. Our love to your hosts. CHL 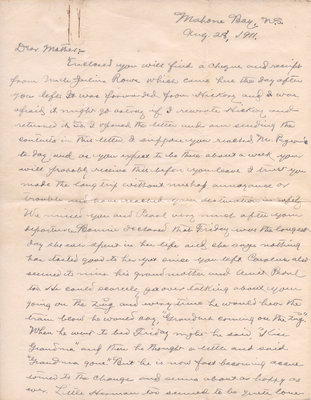