Official Organ of the Lutheran Synod of Nova Soctia

As 1910 has unrolled itself with the ages of the past since I wrote you last, I suppose you will be looking for another letter from me, the first one in the new year. I will try therefore to see that you are not disappointed. No doubt by the time you receive this your company will have gone and you will have leisure to read it. I know it must have been a happy gathering that you had at home during the holidays and I would very much have liked to be present with you all. But I suppose it is all over now for another year and those that are gone again have but the memory of a good time to cherish and so are no better off now than I am as I too have pleasant ones of the past also to recollect. Before I forget it, while yet the holiday spirit lasts, let me wish you and those still with you a happy, blessed and joyous New Year.

Carolus begs leave to thank Mrs. Baker for the nice New Year’s card and good wishes therein expressed. He desires me to express his surprise that she should remember him as he was only in invisible embryo when she met him but he has good recollection of her and thanks her all the same.

A Christmas card from Pearl bore the information that she and a Miss Rudisill from King's Mtn. were going to Washington where they would be Dr. Bikle’s guests during the festive season. I have no doubt he gave them a good time. Maybe Miss Nettie

has an eye or two on Bikleˊ. We received a card from Bikleˊ himself also and I have been intending to write to him ever since, but business has been too brisk for me to take the time. We received a great many Christmas and New Year cards from various and sundry relatives acquaintances and friends.

Bonnie was going to write you last Sunday, but she had a young lady here staying with her while I was at Chester and as the said Miss was an endless chain chatterbox she didn’t have a chance to get in a letter edgeways. Since that time she has been busy sewing, but perhaps she will get around to it by and by.

I forgot to say in my last letter that the report in reference to the Rev. Waldo Emerson Murray was fully corroborated and confirmed by the appearance of the announcement of his marriage in The Lutheran. He married a Deutscho, a Fraülein from Berlin who rejoiced in the euphonious name of Clara Dieralla. Dr. [Y?] helped to splice them and they were married in Rochester, NY. Perhaps though Herbert has seen all this and reported it. Thus Exeunt the bachelors. We have been having all sorts of weather since I wrote you last week, weather enough for two years, most of it of a dreary dismal kind. Friday and Saturday were quite cold, the thermometer dropping Saturday morning to two above and not rising over 12 above during the day. I drove to Chester that afternoon; but did not mind the cold in the least during the 20 mile drive. Sunday was considerably milder and gave evidence of a change which came on Monday in the form of rain and continued until late last night. Today has been a little colder with seasonal snow squalls and tonight the wind is whistling with a

shriek and a shrill which indicates that winter hasn’t given up its job yet. I had a hard day of it Sunday, preaching at Chester in the morning, having the funeral at Indian River in the afternoon and preaching here in the evening, but I got through with it all in fairly good shape. We couldn’t hold our annual meeting here on Monday of this week on account of the rain and so we had to postpone it until Wednesday evening of next week.

We had a Council meeting, however, and they paid me off my quarter’s salary so that for the present I am fairly flush again and am no longer in immediate want. In behalf of Carolus I desire to thank you most heartily for the Christmas present of $1 which was duly received. He put that in his bank. He is now the richest one in the family and our banker. When our funds dry up we always call on him and he helps us over the crisis. He now has twelve dollars to his credit. If we ever get to where we don’t need to draw on him I will put his money in the savings bank for him. We ate our goose on last Saturday and the following days. It was one of the finest fowls I ever saw and Bonnie had it roasted to perfection. I don’t think that there is anybody living that can beat her on a roast. But I have run out of news and here is a good place to close. So good night, Sweet dreams. With love to one and all and a kiss from Carolus, I am 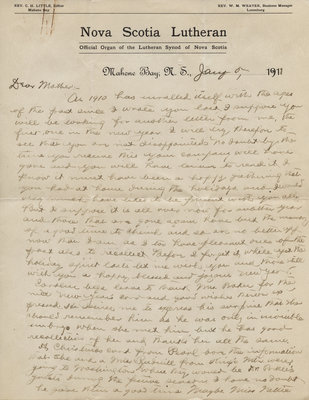