Offical Organ of the Lutheran Synod of Nova Scotia

Today we received a copy of the Charlotte Observer containing a full account of Herminie’s wedding which we read with great interest. It certainly must have been a swell affair – no doubt the most brilliant function of its kind that ever occurred in the Church at Hickory. It must have been a very enjoyable occasion for all concerned in the festivities, and it would have given [us] great pleasure to have been there. But as that was [impossible], we find some satisfaction in reading [?] the interesting event. We will be glad to hear [?] further concerning it that you may [favour ?] with when you get a little leisure in which you [?] write. No doubt you have had your hands quite full lately and were sufficiently busy both before and after the memorable occasion. It was quite well written up in the Observer.

We have both been having a great deal of wet weather since fall set in in earnest. It has been on the whole a milder fall than usual, though we have had some fairly cold weather already. Yesterday we had snow squalls off and on all day and tonight we had sleet, snow and rain following one another in rapid succession. We were to have had a social in the Sunday School room of the Church given by the Ladies Aid tonight, but it had to be postponed on account of the inclemency of the elements and is now set for Tuesday night of next week. On Tuesday next we are going to give a “Ministerium” in honour of the Rev. and Mrs. Brewer who will soon leave us for Buckley, Ill. Bonnie is as busy as a bee planning and getting ready for the occasion. She is ambitious to give a good one and I guess it will not fall behind any of the social functions

of similar character yet held by any of the ministerial households. All of the ministers and their wives are expected to be present and spend the day. Tuesday is also our election day. It is only a Council Election this time, that is an election for what you would call county commissioners, but there is just as much interest in it as if it were a Dominion Election. They have put my name on the list of electors, so I suppose I will cast my first Canadian ballot on that day. The two parties are known as Liberals and Conservatives or by nicknames as “Grits” and Tories”. I am naturally a Liberal or “Grit” and expect to vote that [?] The Liberal party is the party in power. It has be[?] years in Nova Scotia [?] 1877 in the [?]. I see from the papers that the Democrats [?] quite a sweep in the recent election in the States. I [was] glad to hear the good news that the party was [coming] to its own again and especially to see Roosevelt set down upon so thoroughly in New York. It ought to take some of the conceit out of him and put him out of commission for the Presidential race in 1912.

Last Sunday I preached at Chester. I left here on Saturday and had rather bad weather for the long trip. The congregations were also smaller than usual. We haven’t had a real fine Sunday now for over a month. I had to postpone my communion here twice on account of the weather, but hope to have it next Sunday. On Tuesday night last I was down at Indian Point again catechising. I have a very good attendance down there, but I do not know yet what the result will be. It is a union Church down there and conditions are not such as one would like them to be. It will probably be mid-winter or toward spring when I finish my course there. I will soon have to begin here again. These things with my other work will keep me quite busy through the winter.

Everything seems to be going along satisfactorily except personal finances. They are as pinching as ever and by the time Christmas comes around this year I will probably be as penniless as I was last year. I never expect to see any improvement along this line. I don’t care much for myself and don’t worry about it, but Bonnie finds it hard.

Carolus is growing fast and is one of the strongest and healthiest lads of his age you ever saw. He is as mischievous as the day is long and is as quick as a flash. He doesn’t talk much but he says a number of words and often says “Papa’s boy”. He [has a] very large head and no soft spot on it. He never had [?] than a ten cent piece and it grew shut long [?] see him eat. He can feed him [?] take as big as a mouthful as [?] person. But [?] time. So I suppose I will have to close. With [?] to you all, I am 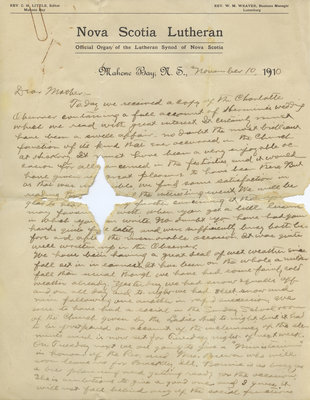