Creators
Carroll Herman Little, Correspondent
Candace Little
, Recipient
Media Type
Text
Item Type
Correspondence
Description
Partial handwritten letter from Carroll Herman Little to his mother. Little describes life with his wife Bonnie and their first child, Carolus, and his work as pastor of the New Germany parish in Nova Scotia.
Notes
-- The letter was written in the spring of 1910, but the exact date is unknown. Page 1 is missing.

and was followed by a lively discussion in which all the pastors took part. On Sunday evening Pastor Bermon preached on “The Great Commission”. This was also followed by a general discussion in which we all took part. Rev. Bermon is an excellent preacher. I regard him as one of the best we have. On Sunday we had three sermons by pastor Brewer, Bermon and myself. I had had practically no time for preparation and was on pins and needles, as it were, but happily I got through all right. While cruising around Rose Bay I discovered a gold lead. I told Rev. Behrens that I had found a gold mine and borrowed an axe and accompanied by him and one or two other doubting Thomases, I broke up the quartz and found evidence of gold in it. Since then I submitted some sample stones to our jeweler here. He examined them under the microscope and found some gold in them. It was in very small quantities, but was there all the same. It was hardly rich enough, however, to warrant spending 10 or 15 dollars, the amount necessary for taking up a claim. Still there might be a lot of gold there. The lead had never been opened before though it was plainly exposed and right near the road. We had rather poor weather for our Synod. It was either raining or threatening rain nearly all of the time. The attendance was small and the collections amounted to only about $25. It was too busy a time, right in the midst of planting.

Mrs. Zuck, Matron of the Orphans’ Home, has tendered her resignation to take effect Sept. 1, 1910. I think she intends to get married. We may possibly be able to get Mr. Wm. Bailley of Lunenburg to take charge of the Home. He is the foremost layman in our Synod and would make a success of the Home. It would set it on its feet again and put it in better position than it has been since Herbert retired as House father.

You are right about Halley and the comet. I was well aware of the circumstances but wrote only in a general way without regard to scientific accuracy, not thinking that I would be picked up on the subject. I should have been more exact. I returned home from Synod Monday noon. Tuesday I finished my gardening. I put out 20 hills of cantaloupes, 20 hills of cucumbers beside beans, turnips, sweet corn, beets and popcorn. I will have quite a garden if all goes well. Already some of my lima beans are up and the lettuce is up and doing fine, so also the onions. I think I have 12 different things in the garden. I have boon working pretty hard in a manual sort of way for the last two or three days. I have the lawn all mowed down and trimmed up nicely. It looks quite fine now. I planted some phlox and nasturtiums today. I had to make several sick visits yesterday and today and have had hardly any time for study this week. I will go to Chester Sunday. My horse is well again and I will return my little pony Saturday. We had our

first dish of ripe strawberries for tea this evening. They were not native berries, however, but imported. Ours will not be ripe until the middle or last of this month. The wild berries here ripen first and are also the sweetest. I think this is the opposite of the way of the berry with you. I was glad to hear that your Graunstein grafts were growing. If you had grafted on the limbs of grown trees you would have had the fruit much earlier I think. But in the long run the other way is perhaps the best. Bonnie and the baby both had quite a siege of the grippe, but both are coming around again. I think Carolus missed me while I was away. Bonnie says he was trouble-some and didn’t sleep well, but ever since I came back he has slept all night and till eight o’clock or after in the morning. He is beginning to feel like himself again, which has not been the case since he took his cold. Bonnie says Many Thanks for the ages sent. She wants to put them down in our Birth-day book. We are waiting expectantly to hear more definite news concerning Walter and Jennie Lee. Tell them to come up to see us on their honey moon trip. Well, I must close.

Much love to you all, I am 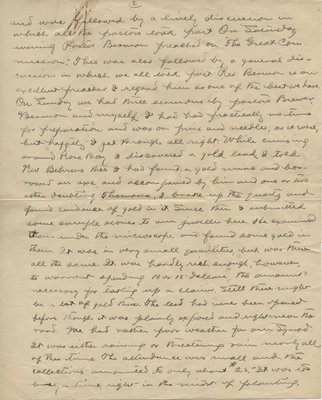