I am rather late in getting a start at writing tonight but will try to give you a short letter anyway. I was out mowing the lawn until nearly dark tonight and after I came in I had the baby to put to sleep and then company came. And as it doesn’t get good dark this time of year until nearly nine o’clock, it brings bed time around rather early in the evening. I wish you could see our place now since the trees have put out and the grass has come in thick and green. I have the lawn in fine order and many people say we have the prettiest place in Mahone Bay. The house, being newly painted shines up fine too. If I could afford it I would have a picture made of it and send to you, but as it gets toward the end of the quarter funds are growing low. The baby attracts attention every time we take him out. He is so pretty and so fair that every body wants to stop and look at him. He likes to go out too in his little go-cart and is especially taken up with the horse teams and ox teams that he sees. He “hollers” at every one that passes and waves his hand at them. He is very fond of driving in the waggon too and wants to go every time he sees me with the horse. It is beginning to get warm now, though the warm weather

is very recent and is really only luke-warm yet, so to speak. We had a pretty heavy frost Sunday morning June 5. It killed cucumbers and other garden stuff and in some places the potatoes also that were up. I had some beans up. They were touched but only a few were killed. However, my new horse broke out of the barn the other night and tramped up the garden and rolled over the bean piece, and as the ground was soft from rain he played bull in the china shop with my garden. It seems he was bent in doing all the damage he could. I drove down to Chester on Monday to return my other horse and waggon and I nearly froze. It rained and sleeted and snowed and my hands were nearly numb by the time I got down. They were not so cold all last winter as they were then. I had on a pair of gloves, but they were only thin cotton and after they got wet, were no protection at all. Wednesday Bonnie went up home for the day and I kept Carolus. He was as good as pie all day. Bonnie went up because they wanted to divide between her and Meda some of her mother’s personal effects. On Sunday last I preached here three times. It was my day for Chester, but a little girl member of our Sunday School died Friday morning and had to be buried Sunday; so I arranged to go to Chester next Sunday and took the funeral. The little girl was 11 years old and was one of the prettiest and brightest little things you ever saw. In some way

she became poisoned and suffered intensely for about a week. They had four doctors but they could do nothing. I was to see the little girl before she died and she said “I thank you for coming to see me”. She was one of the politest and most sensible girls of her age I ever knew and was popular with every body. The funeral was the largest I have ever had. The Church which will seat 700 was packed from the chancel to the door. The Sunday School marched in a body at least a hundred strong. As I did not got to Chester on that day, I preached here in the morning also. I will have no sermons here next Sunday, but will preach at Pleasant Point in the evening. I suppose Bikle and the girls are all home now. Tell him to write to us. Today is Blanche’s birthday. I was going to get a birthday card and send to her, but forgot it when I was down street. Carolus will be a year old the 18th. How is Leopold coming on with his store at Henderson. We haven’t heard anything about him since shortly after he went there. I suppose Herbert is taking a rest now. I received Catalogue of the college some days ago. Well, I must close. With love to you all, 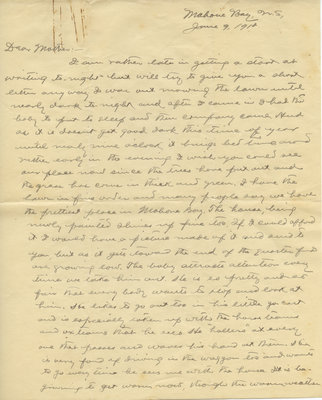