Creators
Carroll Herman Little, Correspondent
Candace Little
, Recipient
Media Type
Text
Item Type
Correspondence
Description
Handwritten letter from Carroll Herman Little to his mother on April 28, 1910. Little describes his life with his wife Bonnie and son Carolus, and his work as pastor of the New Germany parish in Nova Scotia. He discusses attending the launch of a ship.
Notes
Carroll Herman Little (1872-1958) was a Lutheran pastor, and a professor and administrator at the Evangelical Lutheran Seminary of Canada (later Waterloo Lutheran Seminary; now Martin Luther University College) in Waterloo, Ontario.

As another week has gone by since I wrote you last, I will endeavor to give you a few lines again. Our rainy weather of which I wrote you last week continued until yesterday afternoon. Then we saw the sun for the first time in nine days. But it wasn’t with us long. Today opened up cloudy and cold and we had reactionary storms with frequent snow-squalls which continued almost all day. The weather hasn’t yet cleared up finally or settled down to good behavior, but I think the worst is past any way.

Yesterday was an eventful day in our village, the occasion being the launching of Mr. Ernst’s new vessel. Bonnie and I and the baby all went down notwithstanding the slight rain that was falling. The vessel slid down the greased slides very gracefully and took to the water as naturally as a duck. Between 50 and 100 boys and men were aboard and rode down with it. A large crowd of people were lined along the shore as interested spectators. On account of the rain and to keep the baby in the dry we viewed it from the second story window of the fish factory which was only a few feet away. Carolus watched it and seemed as interested as any body. He is a great lad to take notice of everything. It was

the first launching any of us had ever seen and was a very interesting sight. Another vessel built by a different firm will be ready for launching in two or three weeks time. Mr. Ernst will put another one on the dock right away. It will be a steamship and will be finished by the last of July. It is being built for a Halifax company and will ply between Halifax and Sydney, Cape Breton. As soon as it is launched he will build a steamer for himself which he expects to have finished in the fall before the cold weather sets in.

I had a marriage yesterday up at Farmville which netted Bonnie a fee of five dollars. The young lady was a woman from London, England, who came out with the Salvation Army immigrants a few years ago. When I asked her what her mother’s name was, she said Henna Orton (Emma Horton) with pure cockney accent. The man she married was a brother of one of my members at Farmville at whose house they were married, which accounts for my getting the wedding. I had to hire a team to drive up, but the groom paid extra for the horse hire, so that I had the five dollars clear. My horse is still quite lame and I haven’t had him out of the barn for the last ten days or more. He sprained the large muscle that runs from the rump to the hip, or vice versa, and I guess it will take quite a while to heal it up. I am applying turpentine principally. Last Sunday I walked to Farmville and back for the afternoon service. I walked up in one hour and twenty minutes and back in and hour and a quarter.

The whole distance was ten miles. I felt a little sore for a couple of days. Next Sunday is my Chester Sunday. I think I will go down on the train Saturday evening and get some one to drive me back Sunday afternoon. It is quite an inconvenience to be without a horse, but I can’t afford to hire. Bonnie thinks we have it poorer now than any of the other ministers or than almost any body else, and is as I expected she would be somewhat restive under the restraints of poverty. If her mother had not died and she could have worn the clothes she had, she would not have been so destitute. She had her suit and some of her clothes dyed, but they didn’t look as nice afterwards and she has had little new since. It is only natural that she should want nice things to wear and I do the best I can for her; but that is, of course, very little. I am worse off than she is in a way. My short coat suit, which I wear for every day, is all frayed in the sleeves and out at the elbows and hardly looks decent, but I console myself that "poor folks has poor ways” and don’t bother myself about it or allow it to worry me. But I feel sorry for Bonnie and feel that I really ought not to have married her till I could support her decently. I am afraid she will worry herself to death some time. Carolus doesn’t walk yet alone, but he goes all over the house with chairs and by aid of the walls. And if he sees a door ajar he makes for it and opens it and frequently finds himself out in the porch or in the pantry or dish closet. He just now came to the door that leads up the stairway and finding it shut began to cry as he wanted to come up to the study. I had to go and get him. He likes to stay up here with me. He sits on the floor and plays with my waste basket wasting its contents all over the floor. But I must close. 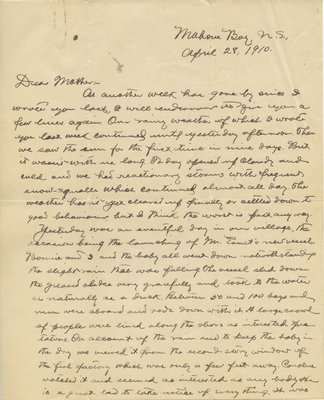