Your most welcome and interesting letter came duly to hand a few days ago and was read with much pleasure. I will try to give you a few words by way of reply tonight. We are having a rainy siege up here at present. It has been raining steadily ever since Tuesday afternoon and is still at it. At times it rains hard but most of the time it is only a dull drizzle. But it is getting some what monotonous and we don’t enjoy it very much. In fact Bonnie says it is “abominable.” But I quote to her the nigger proverb, “Better stop dis kickin, Doesn’t help a bit; Kin’o’ weather what you has Is all you’re gwine to git.” But for all its disagreeableness, it is good growing weather and you can almost see the grass shooting up. Our lawn is a beautiful green now. Some people have done their gardening already and put out their potatoes, but we have done nothing yet. I ordered a lot of seeds some time ago, but haven’t heard a word from them yet. But there is plenty of time yet to begin gardening. I think things grow better, when the ground is good and warm. I had a funeral last Saturday at Blockhouse with burial at Farmville. That was in the afternoon.

On Sunday I preached twice here and once at New Cornwall. I was pretty well tired out by Monday morning. Last week my horse stepped in a little hole with one of his hind feet. He didn’t seem to mind it at the time and was all right Sunday yet. But he must have sprained his leg, for Monday morning he was lame when I took the wash down and by Monday evening he could scarcely walk. That evening Bonnie and I started with him to go out to Northwest to baptize a couple babies. He went so slow and so painfully that I hitched up on the side of the road as soon as we got outside of town and we walked the rest of the way, about 2 miles and a half. Since then I haven’t had him outside of the barn. For a couple days he couldn’t lie down and when he did get down he couldn’t get up, and he is little better yet. I am afraid I will have to walk up to Farmville Sunday afternoon. If I have to buy a new horse I don’t know what I will do – make application for a place in the poor house, I suppose. We find it hard to get along as it is, under the best of circumstances. I don’t mind it for myself, but Bonnie does. She says she will never be happy till she can get some new clothes and declares that she will not go to Synod because she has “nothing to wear”. I would gladly help her out if I could. Where I made the mistake was in getting married when I did and in bringing the little girl into such straits of poverty which are for her well-nigh

unendurable. Our Synod, according to the decree of President Weaver will meet one month earlier than the regular time this year in order that Rev. Behrens who is going to Europe on vacation may be able to attend. I don’t like the change because it will throw everything into confusion. None of the reports will be finished or the accounts complete and it will make the Minutes confusion worse confounded. I told Weaver that I was opposed to it but that I would consent to the change on one condition and that is that I should be relieved of the Secretary’s position. He didn’t say anything about my condition in his reply, but I will insist on it. The Secretary’s job is hard enough at anytime but the unfinished nature of the proceedings will make it ten times worse, and I am not willing to undertake it with the mess the change will make out of it and the worry that it will involve. Bonnie is busy just now making a pair of rompers for the baby. She got a pattern this evening and is now cutting out the goods. During this rainy weather Carolus got all of his dresses dirty till now his mother thinks he looks a perfect fright and if [?] would frighten anyone. I guess she is about right. The little fellow is just as happy though as if he were dressed in silk or spotless linen. He doesn’t walk alone yet, but can walk all around the room by holding to the wall and if chairs are within reach he can go anywhere in the house. He understands what you say to him so well. He shakes his head, waves his hand and throws

kisses whenever I tell him to. And he does it all so gracefully too and seems to take great delight in his accomplishments. He doesn’t attempt to crawl but if put on the floor he rolls himself over and over till he gets across the room. Some times he rolls himself around in a circle, much like a pup chasing his tail and you would be surprised to see how rapidly he can do it. He can move around the sofa too about as fast as any child you ever saw. I wanted to get him weighed again when he was 10 mos. old but didn’t get him up to the shop. He moves around so much though now that I doubt if he gained much. Bonnie told me to ask you for a recipe for chicken pie. That is one dish that is unknown up here and she wants to try it. We are invited out tomorrow evening to Miss Mason’s. I suppose she is wanting to get on the good side of us in view of possible future connection. Mr. DeLong says he likes her very much, that as yet they are only friends but he doesn’t know what may yet come of it. My opinion, however, is that she is quite as willing as he is. She is a music teacher and an elocutionist or to use the Southern term an expressionist. In church affairs she is a Methodist, which would suit father DeLong O.K. Bonnie and baby are wanting to go to bed. So with love from us all, I am 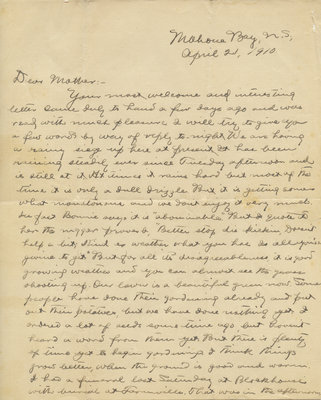