I do not have much time at my disposal to-day as I expect to go down to Bridgewater directly but will try to give you a short letter at any rate. Bonnie and I are going to drive down if I can get a waggon and we will not get back till late to-night. Last night we were out to a little ice-cream sale gotten up by some of my friends at Hemford, the proceeds of which, I hear, are coming to me personally. It was a very quiet affair but I suppose they took in several dollars. The night was moon light and magnificent. We enjoyed the drive out and back in the cool of the evening very much. We have been having some exceedingly hot weather of late. It has been the longest steadiest hot spell I have yet seen in Nova Scotia. Day before yesterday, which was the hottest, it was 94 in the shade. I discarded my undershirts a week ago and never wear a coat in the house except at meal times. I am like the fellow from down the river up who asked father Cossmann to cut the marriage ceremony short for him, “because I shweats so.” There is only one relieving feature about the heat which renders it less oppressive and that is we always have a breeze blowing. This morning it is starting off nice and cool and there is the most refreshing and delightful breeze. Hay making is starting in good earnest now and so far there has been fine weather for it. We could scarcely have had a better season and the hay crop will be far above the average. The haying season is two or three weeks ahead of last year. That will make an early fall. After haying the summer is considered as pretty well over and people are on the look out for frost and fall. The country is fairly fragrant now with new mown hay and the “stooks” in the fields present a picturesque appearance. Last Sunday morning and afternoon we had a very heavy rain. It fairly poured about Church time and it interfered greatly with attendance at Church.

It was my confirmation day here and I expected a large congregation and would have had it if the rain had not come on just when it did. Even as it was the Church was about two-thirds full. I had nine for confirmation, my own little girl Bonnie being among the number. I was afraid all wouldn’t get there because of the rain, but they all put in their appearance. It was the first time, I think, that I got all that I expected and was not disappointed in any respect. The service lasted two hours and I preached with earnestness and vigour from 1 Tim. 5:12 “Fight the good fight of faith” etc. Considering the day also, I had a very good communion. I got only $2.68 collection however, and as I had advanced about $13.00 on my Synodical appointment and this is my last collection, I am about $10 in the hole. If it had been a fine day I would have got 5 or 6 dollars here, as people from all around were counting on coming. But if it happens to be a rainy Sunday when I have my communion my collections fall short, and we had lots of them last year. It is two months today till I will be married. I am going down to Bridgewater today to see about having some clothes made. I am going to get a waggon too now shortly. I find I can get a good one for about $75.00. I am tired of hiring and borrowing waggons so much. I took Bonnie with me to Newburn and Woodstock Sunday. She enjoyed the trip very much, but found the road rough. Bonnie says, It is so nice to be a Lutheran. Mrs. Feindel, Bonnie’s grand-mother, said she felt like going up with Bonnie and being confirmed. Mother de Long was coming down, but owing to the rain she didn’t get there. I received a nice letter from Bikle last night. But I must close. Perhaps I will be able to get this off on the train this morning. With love to you all, 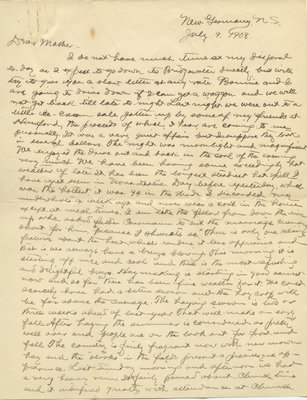