Your kind and interesting letter was received last evening and read with pleasure. As I will be busy after this evening for the rest of the week I thought I would take a little time this afternoon to write you a few lines. Bro. Murray, the President of Synod, arrived on the train this morning. He is present with me now, but I have given him a chance to take a little nap while I am writing to you. In as much as I have selected him to marry me, I have placed him at Mr. de Long’s through the Synod. Our convention begins tonight with the Confessional service and sermon by the Rev. McCreery. Only two delegates have arrived so far but most of them will be up, I presume, on the train this evening. We have the promise of good weather now, having had rain yesterday and heavy showers this morning. It is pretty warm now, but not oppressively so. I finished my paper on the Doctrine of the Church the other day, and while I didn’t get it shaped up as I would have like to have it, I suppose it will do as a starting point of the discussion. I suppose Herbert received the letter I wrote him the other day. I was very much put out over Weaver’s action in the matter and I wrote him a pretty strong letter expressing my sentiments and from the tome of his reply I judge that he is a little “huffy” over it. But I consider that I had just cause for indignation and will tell him so when

he comes up. I was down at Bridgewater on Tuesday. Bonnie and I went down on the train and after dinner we drove out to the Home, where I spent an hour or so recording the Minutes of the previous sessions of the Board and Executive Committee. Everything seems to be moving along fairly smoothly out there so far though Mrs. Zink, the new housekeeper complains over the vast amount of work there is to do. [?] Mr. Stevens should find himself a woman and get married, there will be no satisfactory administration of the Home during his incumbency. The four little children were glad to see me and still call me “Uncle Canty”. I gave them a pound or two of candy which set them in great glee.

I saw the Rev. Hartwig down there. He told me of the call he had received and how he had at first declined it and then reconsidered. He said he had left the matter entirely in their hands now. So that I think if they want him he will come, although he is more contented at present than he was a while back. Last Sunday I preached at North River, Newburn and Stanburn and had very good congregations all around. I held my next to last communion at North River. The day was fine and considerably cooler than on the Saturday previous which was quite hot. Sunday the body of Arnold Chesly, a young man of this place who has been demented for a number of years was found in the New Germany lake. He had made several previous attempts upon his life, but had failed hitherto. He was buried by the Methodist minister. Owing to the rains and other matters interfering we have had no practice of the full choir for the Synodical services. I don’t know how we will get along, but will do the best we can. As I told Herbert in his letter, I will have my confirmation here on the first Sunday in July. I have the promise of nine. Bonnie will be confirmed at that time and I think will make a good Lutheran. She said the other

day, “I always did like the Lutheran Church, and I am glad you are a Lutheran”. I have had her studying the catechism for some time and I have given her some special instruction on the Sacrament of the Altar. I am afraid you are undertaking too much in offering to make me a present of a trip home for myself and “bonnie bride”, and I did not write so discouragingly in order to provoke such an offer. It will be rather humiliating to think of myself as dependent on the charity of relatives. But I suppose one might as well take it as a gift as to borrow the money with no hopes of ever being able to repay it. And outside of the one or the other, there is no possibility of my ever getting home. I was sorry to hear that Will Henderson was sick, but hope that he will soon be well again. Herbert said in his letter that Rev. Tom Huddle said I should let him know when I passed through Washington, as he wanted me to preach for him. I am glad I got the word, as I will be the better able to avoid him. Having been forewarned I will be on my guard. I am feeling pretty tired and would like to have a rest and I don’t propose to do any more work than is absolutely necessary while I am away. I received Pearl’s letter together with your own, but will not have time to give it an answer today. I will have a good deal to occupy my attention for the next few days. I rather dread it and wish it was all over. I would like for them to elect some other minister secretary of Synod, but I don’t suppose they will do it. The new parochial blanks were lost by McCreery or some of them and that is going to involve confusion and make lots of extra work for the secretary, as there will be no uniformity in trying to put the new material on the old blanks. But I must close. 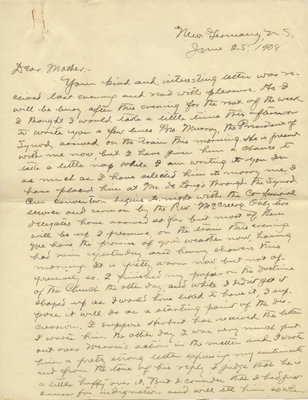