Your most welcome and interesting letter of the 13th inst. was received a few days ago and was much enjoyed. I wish I could give you a good long one in return, but my time tonight is very limited. It is already considerably after eleven o’clock and I am somewhat tired having rode 20 miles on horseback since supper. I went down to Herbert’s yesterday evening arriving at about 10 o’clock. Early this morning I went to Bridgewater where I had some dental work done and then up to McCreery’s where the Executive Committee of Synod held session to prepare a programme for the coming convention here at New Germany the last of June. In the afternoon we had a meeting of the Executive Committee of the Orphan’s Home, where Herbert made his final report. It was an eye opener to some of the members. They didn’t have any idea that so much was being accomplished and are beginning to realize their serious mistake in letting a good man go without strenuous effort to retain him. As the report will appear in the Nova Scotia Lutheran shortly I will not take time to go into it here. I am very sorry especially for the interests of the Home that Herbert is going away. In a couple years he would have been able to wipe out all the indebtedness and put the institution on a firm footing and I am very glad that I had nothing to do with the meeting that accepted his resignation. The Executive Committee and majority of the Board who were present today drew up and passed a strong resolution of thanks and praise

for the work which he has done. Herbert and family expect to leave Nova Scotia, Wednesday June 3. They will come up here on Friday before and stay all Monday and then will go out through the valley and visit Grand Preˊ and other sites reminiscent of Evangeline and will leave Yarmouth on Wednesday. I wish I could go with them through the Evangeline country proper but I will be too busy. I have catechetical work and other matters claiming my close attention from now till the meeting of Synod.

I was very much interested in your description of your visit and am glad Mrs. Lohr was so much disappointed in you in regard to your age. It shows that you are more than holding your own. And any way you are not a great deal older than pastor Lohr and I am sure you are not half as grey or as old looking as he. I question myself as to whether you are 69 as you wrote in your letter. I think you exaggerated your age by about 10 years. You are not as near as that to “three score years and ten”, I know. I see from the Lincolnton paper sent me the other day that Clarence has bought young Lawing out and that he and Leopold have gone into co-partnership. This must be more satisfactory to Leopold than the former arrangement. I remember quite will the incident of jumping the board that Mrs. McCoslin related and all the circumstances connected with it and how Blanch threatened to tell mamma etc. But my! Mrs McCoslin must be an old woman by this time. I thought she was a pretty old woman then and that must have been well on to 30 years ago. I had no idea she was living yet. Her husband Mr. George McCoslin has been dead these many years. I remember him a big heavy set man with grey chin beard. I also remember hearing him and papa discuss the assassination of Garfield at the time. Mr. McCoslin said ‘Even if he was a Republican he oughtn’t to have been shot’ and in this humane, sensible and sane view father concurred. I would like very much to see the old lady again and am glad to know that she is still very much alive. Perhaps if we have time, when Bonnie and I come home we will be able

to get down that way for a spell. I hope the girls will all be at home then. It would be nice if Bikle could get off then also. As to the small pox, it is not that that would frighten me. I am not half as afraid of it as of the vaccination. I wouldn’t mind having it if I could have it as easy as all of the cases in Newburn and Forties’ Settlement. It is of a very mild type and not as bad as the measles. I didn’t get back to Newburn last Sunday yet, but expect to be there and hold my communion on the First Sunday in June. We are going to have an ordination at the coming convention of our Synod. Candidate Brewer who has accepted the assistant pastor’s place in Bridgewater parish will be ordained here. It will be the first act of its kind for our little Synod. Tuesday last was Bonnie’s birthday. On that day she was 20. I gave her a beautiful illustrated Red Letter Testament. It didn’t cost me much but she said I couldn’t have given her a more acceptable present. She is a fine little girl and I am sure you will like her. I was up to see her tonight after my return from Bridgewater which accounts in part for my late start on this letter. But really I must close. With love to you all, I am 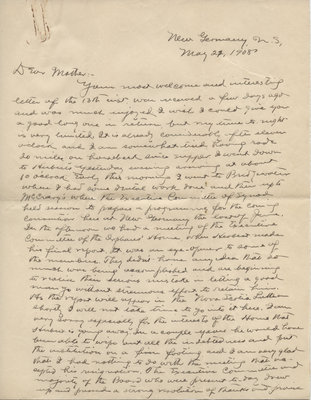