I suppose you are all sweltering in the heat down in North Carolina now. We have been having it pretty hot up here for several days – about as hot I think as we ever have it in June. If it were not for the breezes that blow continually I hardly know how we could stand it. But it is only since Sunday that we have had it so and today it has been modified some what as to temperature by refreshing showers. Last week was quite cold. I was out Friday night on a sort of ghoulish expedition and did not get home till 1:30 Saturday morning and I didn’t suffer as much from cold all last winter as I did then. I had only a light overcoat on and it was very frosty. It would have killed a lot of stuff that night if a protecting fog had not providentially come in. Some garden stuff was nipped as it was. But the weather has been making up for it since. Sunday was a very warm day and very trying on me. I was so warm and tired Sunday night that I didn’t get to sleep till after two o’clock. They had a curiosity at the place where I stayed in Lower Woodstock in the shape of a young cub which they had caught in the woods. It was about the size of a fat fox terrier. But I must tell you about my trip Friday night. You know I had to bury a girl in the great city of Ninevah on the day Herbert and his family were up here. The corpse had been sent over from the States and the paper that accompanied it stated that the girl had died from “Septicemia following pelvic abscess”. As I

was informed that she had died from the effects of an operation in the hospital, putting the two together I considered the case rather suspicious. Well Friday evening a man came over from Bedford, Me., with state papers authorizing him to secure the body and return it for postmortem examination. It seems that a criminal operation had been performed and that they were on the track of the parties to it. The man bore a letter to me from the girl’s brother-in-law, asking me to accompany him and use my influence to induce the parents to give up the body. We got over about half past nine and had no trouble in securing their consent and proceeded at once to work at the grave digging. I stayed till 12 o’clock and we didn’t have it up yet. But they got it up at about one o’clock and took it back to Maine the next day. The man promised to return it but had not done so yet. The whole affair created quite a sensation around Hemford. But I hope the perpetrators of the crime, a married man who was the chief instigator of the trouble and the doctor who performed the operation will get the punishment that they so richly deserve. I preached at Newburn last Sunday for the first time since the small pox outbreak in that section. All the cases are over and there are no new ones. None of them were serious. I had my communion there but the Church Extension pyramids distributed last winter had been laid aside and forgotten and I got no collection on that score. I am afraid it is going to push me to get in all my appointments this year. Owing to a mistake in reckoning the time of Synod I will not get in my communion here until the first Sunday in July, and if my Hemford class comes up missing I will have no confirmations to report, which will be rather discouraging. Last week prospects seemed brighter at Hemford, but I was over last

night and only two shewed up and I dismissed and came back home in rather despondent spirits. I will endeavor to meet them once more on Saturday night and see what can be done for the following Sunday. Last Saturday I had a marriage here. It brought me in $2.00 enough to buy me a straw hat. Tonight I will have another one in Hemford – Miss Hirtle of the Chester Restaurant and Mr. Robinson, Life Insurance agent at Bridgewater. I may get $5.00 out of that if it is permissible to count one’s chickens before they are hatched. Bonnie is going with me tonight. The ceremony takes place at half past eight. I haven’t heard a word from Herbert and Bessie, except a card written from Wolfville or Grand Preˊ, N.S., since they left. But I trust that by the time this letter reaches you they will have reached their long destination in safety. I am still in desperate financial straits and rather low spirited over the outlook. I don’t know how I am going to get along at all, but hope there will be some way when the crisis comes. Friday morning, 7 a.m. – I was out at Hemford last night and married a couple referred to above. It netted me $3.00 which was two less that the estimation given above. But we had a fine time and a noisy one and Bonnie enjoyed it immensely. I will have to close here and go to breakfast. With love to you all, I am 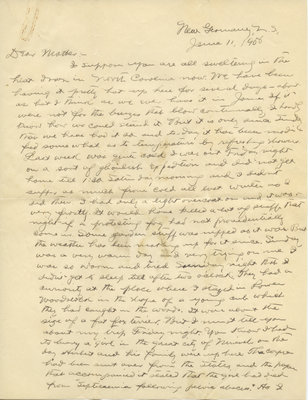