Your very welcome and interesting letter was received a few days ago and read with pleasure. I will try to take a few minutes off my bedtime tonight to give you a short reply. However, as I am very tired and it is already nearly eleven o’clock my words will doubtless be few. I have had very hard work lately. Catechising nearly every night in Hemford has taken up a great deal of my time and then I have had funerals and things into the bargain. I was especially disappointed last Saturday. Herbert and his family came up on the train Saturday morning and I intended staying home with them until Sunday morning, but Friday afternoon I received word of two funerals, one in [?] 10 miles distant on Saturday afternoon and the other in Hemford on Sunday morning at 10 a.m. I was able to stay with them therefore only about two hours on Saturday and as I already had arrangements made for fulfilling other engagements in Pleasant River I did not get back to see them before they left Monday morning. In fact it was Tuesday evening late before I reached home. I received a card, however, from Herbert last night stating that they had attended the closing of Acadia College or university at Wolfville and had visited Grand Preˊ and had greatly enjoyed their trip through the valley. I suppose they were in Boston today. I hope they will have a safe journey on their long trip and will reach home in proper shape and good form. I was out at Hemford tonight again. The prospects are a little better and slightly brighter than when I wrote last week. But I don’t know yet just what will be the result on the second Sunday. I intended to have confirmation here on the 4th Sunday in June and had announced that date for the communion, but found out since that it is the time of our coming meeting of Synod and will have to postpone the communion and confirmation till the first Sunday in July. It will make a poor showing on my parochial report for this congregation unless I can get permission to include the July com-

munion on this year’s report. I have been wondering how Mr. Stevens and Mrs. Zink have been getting along with the children at the Home since Herbert and Bessie left. If things don’t run smoothly there, the fellows that are responsible for it will have to shoulder the blame. I had nothing to do with bringing about the change and am out of it. We have been having some quite cool weather lately. Sitting in the room with the thermometer ranging from 50 to 60 I have wished several times that it was winter, so that we could keep warm. Whenever I have a house of my own I don’t intend to allow the stove to come down until it is a dead certainty that summer is here. The apple trees are now about in full blossom and the fields are all green and the season is at its best. Things are from three weeks to a month earlier than last year. IN reference to the matter about which you wrote me, I don’t suppose I will postpone our wedding, but unless financial circumstances improve considerably I will have to postpone the trip. When I told Bonnie how much money or rather how little I had, she said we had better give up the trip. I didn’t say anything, but my judgement agreed with her. Mr. de Long is putting up a nice house which he will let us have. It is right by my barn and in a beautiful spot facing the road and the river, and will make a pleasant little house till I can get a parsonage built some time. Meda de Long, Bonnie’s sister, a year and a half younger than she will probably be married about Christmas. She will marry a Mr. Gunn, a commercial traveler. He is just a year younger than I am. He is quite a fine fellow and had plenty of money too. He will be here tomorrow night again. As to the Nova Scotia Lutheran, we have some 300 subscribers. But I must close as I am tired and sleepy. 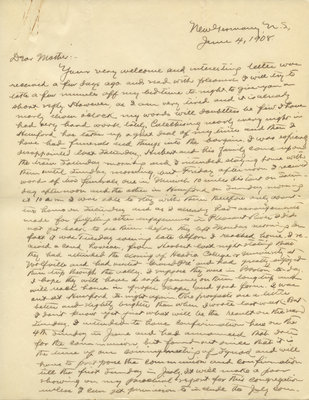