I trust that you have all had a joyous Easter and have been spiritually uplifted by its exalted and triumphant message. With us it was a stormy day. It rained very heavy all morning and until after one o’clock in the afternoon. I had gone up in the North River section on Saturday evening, but did not attempt to hold service on account of the weather. In the afternoon I went over to Stanburn and though the rain had pretty well ceased, they were not expecting me and didn’t have the hall unlocked. Later on in the day I started for Newburn, but when I got about half way I was informed that the Church was closed on account of the small pox scare, and so I turned around and came home, having made a water-haul of the entire day. It was the first Easter on which I didn’t preach at all in seven years. I was sorry of it too, as I always like to preach on the chief festivals like Easter, Pentecost and Christmas. But Bonnie was very glad I came back Sunday evening as she was worrying herself for fear I might get the small pox. However, the cases are so mild that I have my doubts as to whether it really is the small pox or not and have suspicions that the doctors are trying to work up a scare in order to work up a big vaccination business at a dollar a vax. I saw a man from over in Newburn the other day and he pronounced it “nothing but the lumberman’s itch”, whatever that is. I’m only afraid that the news will get abroad and a vaccination

will be required on the steamship lines, in which event Bonnie and I might turn back and not get home this fall. She hasn’t been vaccinated either and needs it about as much as I do. And it is really worse than the tame kind of small pox they have been having in Foster’s Settlement and Newburn.

On Good Friday evening we had a nice service in the Church here at New Germany and a very good attendance notwithstanding the English people (Episcopalians) had service in their Church at the same time. Monday evening I held my Easter Service in the Church. It came off fine. The music was good and well rendered and the children did excellently in their recitations and exercises. The service lasted for about two hours and the people seemed to enjoy it very much. The Church was full, all the sitting room being taken. The offerings amounted to $11.90. I think the service was even an improvement over the one we had at Christmas.

Things are in somewhat of a whirl ecclesiastically up here now. Herbert is to leave around the first of June, and McCreery will also leave Bridgewater in August. Weaver’s tenure in Bridgewater is precarious. Hartwig seems to be playing out in Midville and I don’t think Murray will stay more than a year or so longer in the Bay. It puts affairs in a rather unsettled condition. The Rev. McCreery and wife were up to see Tuesday and stayed till Wednesday afternoon. They are going to Ontario, to the North Williamsburg parish until served by the Rev. Maurer. McCreery was up to see me about considering a call to Bridgewater to become his successor. I didn’t give him any definite answer on the subject, as I wanted to have time to consider it. He is very anxious that I should take it, and it is undoubtedly the most important and promising parish in the Synod. An assistant

pastor has been called for the parish and will take charge in June, and if I should consent to take the work, a division of the parish would be made at the next convention of Synod. St. Luke’s at Summerside and St. Paul’s at Bridgewater would then form one parish and the remaining congregations the other. This would make comparatively little driving for the Bridgewater and easy work. The salary would be $700 and parsonage. If I should consult my own interests in the matter, I would not hesitate, but there are other things to consider. If I should leave here now, there is no probability that a pastor could be secured for New Germany until the summer of 1909 and maybe not then. It is a hard parish with long drives and it would be very difficult to get a pastor to come here especially on the salary offered. And a prolonged vacancy would be deplorable and I would hate very much to see the work which I have got in good shape go backward. Besides my new Churches are somewhat heavily burdened with indebtedness and I would hate to desert those who have made sacrifice and self-denial so faithfully in their erection at this stage. So I hardly know what to do, but the most weighty considerations seem to be against my leaving.

Today has been the first real spring like day we have had this year. It was very cold Monday and Tuesday. Icicles hung around all day Tuesday and we had almost a blizzard of a snow storm. The ground was covered with snow until yesterday afternoon. No leaves or flower of any kind have put out yet except now and then a May-flower in some protected spot. In fact April has been a good deal colder and rougher than March was and gave us also more snow-storms, I think Bonnie and I will go down to see Herbert next week, probably Tuesday. 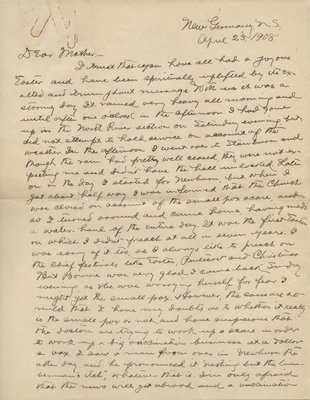