Your most welcome and highly appreciated letter was received several days ago and found quite interesting. My time is never so completely taken up but that I have ample leisure to read all the letters that you see fit to send. There was, however, one word in your last letter which for the life of me (without meaning to criticise your writing, which is usually quite plain) I couldn’t make out. It was in connexion with the 12 hundred rooted things that you sold at one dollar per hundred. What those things were I do not know, nor have I the least idea. I thought when Herbert came up I would get him to try his hand at ciphering it out for me. He is coming up Saturday morning and will bring his family ‘with’, as the Lunenburg Dutchmen would say. He wrote me that they would probably stay till Tuesday, though, of course Sunday and Sunday night Herbert and I will be away in the Newburn-Woodstock section. I am going to see Bonnie and make arrangements to sleep them at my father-in-law’s. I am sure they would be glad to have them part of the time anyway and they can keep them overnight better than we can. I read Bonnie your letter in reference to what you said about my not postponing my marriage on the ground of missing a world of happiness and she said “I say so too”. So I guess that settles it, and for better or for

worse it will take place on the 9th of September, 1908. I was sorry to hear that the peach crop was well nigh put out of commission by the snow and cold, but hope the damage will not be as bad as was first supposed. We have been having rather cold weather lately. It has frozen every morning this week and we have had several little snows. In fact it is snowing now and has been doing so nearly all day, but it is not the kind of snow that accumulates very fast. The ground furnishes a good bottom though for it now, as it has not thawed all day to-day. Everything looks very winterish yet. Not a single green leaf or blade has appeared. The ice, however, has about all gone out of the lake, which is a good sign that spring and summer are close at hand. Last Sunday I filled my regular appointments in Ohio and Pleasant River. The first part of the day was bright and pleasant, though somewhat cold. In the afternoon before service was out it began to rain and as it was cold and the roads desperately muddy and the night dank, I announced that there would be no service in the evening. It rained on till bed time and before morning turned to snow. I got home Monday about noon and made some short trips in the afternoon in the interest of my Easter practice and Sunday school. Monday night I was up to see Bonnie till about half-past ten. I then came home and went to bed from which I was aroused about half-past twelve to go see a sick woman in Hemford. It was eight miles over there and I arrived at about two o’clock. I stayed for quite a while and administered the communion and returned home in time for breakfast. I was good and tired, I can tell you, and

not worth a cent the next day. But I went to bed early the next night and have felt all right since. The woman had heart disease and had been quite low but was better when I arrived and I think she will come out from this attack. I haven’t heard anything from her since. She is a middle aged woman whom I confirmed a few years ago and has been a very faithful member ever since. The chief thing that troubled her was what would become of her children in case she should not recover. I have my literature on hand and everything ready for the starting of a Sunday school Sunday and if we have favourable weather I think we will have a good turn out of children, as all that are in the Easter practice seem interested and anxious to come. I had practice yesterday but owing to the weather and roads there was not a full turn-out. I am having it twice a week now instead of once. I had one addition to my catechetical class last Saturday and the prospect of another one for the next time. I think it probable now that I will have eight or ten to confirm in the Church here in June. I was interested in what you said about little Rein and read that portion to Bonnie also for instruction, admonition and warning in case it should be necessary. But judging from her treatment of Lynton I don’t think she would be liable to be too stringently strict. What Church in Washington does Bikle attend? I mean to what Synod does it belong? I was glad to hear that grandma Little had recovered her hearing to some extent at least and that Grandma Herman was still capable of driving old ‘Merit’, though I think it hardly advisable for her to do so alone. Bonnie thanks you for the message to her and returns her love to you. I must close. With love and all good wishes, I am 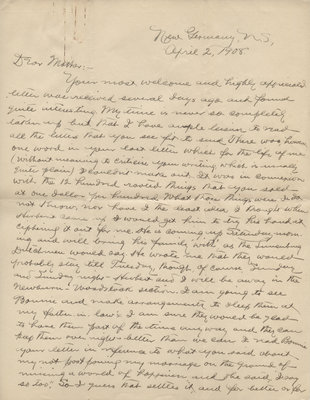