Your most welcome and interesting letter was received the other evening and afforded me much pleasure. Though, as usual, it is late tonight I will try to write you a few lines in reply. On the day after I wrote you last week we had a big snow storm. I suppose there was nearly a foot of snow, but it was very light and the high wind blew it out of the road in many places and banked it up somewhat in others, so that the sleighing was not of much account. But as I had not had my sleigh out of the barn since the ninth of December I decided to take it as I started off Saturday afternoon. It wasn’t very satisfactory though and took me longer to get around Sunday than if I had gone on horseback and I was just about as tired when I reached here Sunday night. But I had an inspiring congregation in the new church. It was, I think, the fullest I have had it since the consecration with the exception of Christmas night. With the exception of one or two seats in front all the seats were taken and I preached, if anything, better than usual. Monday the weather found out that it had made a mistake in snowing and it gave us a great big rain that lasted all day and well into the night taking all the snow away. Monday evening I went down on the train to Bridgewater. As it was raining so heavy Herbert did not get out to meet me and I went up to McCreey’s and spent the night. I had no sooner arrived than Mrs. McCreey and Gertrude, Mr. Stevens and the Rev. Hortwig proceeded to overwhelm me with congratulations, the news of my engagement having preceded my arrival. It seems that it was pretty generally known even in Bridgewater as “The Widows” (Murdock & Conrad at the restaurant, where I always stop) began to overwhelm me as soon as I stepped in. I didn’t care, however, and was able to hold my own in the encounter. Tuesday

morning Herbert came over early and I went out with him to the Home. Our Board meeting took up the best part of the day Tuesday and I worked till pretty late at night transcribing the minutes. We gave the farmer, who has proved very trifling and exceedingly expensive, until the 20th of March to vacate and will try to get a better man in his place by spring. Herbert and Bessie and their children and the orphans were all well. The four youngest of the orphan children are always glad to see me come as I generally bring them some candy or something. I didn’t happened to have any this time however, and they greeted me with “Uncle Carty, did you bring us any candy?”. I said “No, I forgot it”. They said “Well, have you got any cents?” I said, I thought I had and gave each of them a penny. Later on, when I got to Bridgewater again I got them some candy. They all call me “Uncle Carty”, having picked it up from Harold. Harold was greatly taken up with my arrival and wouldn’t be called anybody’s boy but Uncle Carty all the time I was there. On Wednesday I was over at Bridgewater and had my picture taken. I will perhaps have them in a week or so and will send you one as soon as they come. I will have to give most of them to Bonnie though, as she was generous enough to give me five of hers. Two of them are small ones which I have had pasted in my watch and the other three are large ones taken in different altitudes or positions. I had some full length and some just bust pictures. All were taken with my robe on. I wouldn’t have had any taken if it hadn’t been for the insistence of my little sweet heart. I suppose you have received the picture she sent you yesterday. You will probably be able from it to answer your own questions as to her appearance. I will say, however, that she has blue eyes, hair a shade or so lighter than mine and is a blonde. She is, I think decidedly pretty and as sweet and nice as she can be. I read her parts of your letter tonight and she was highly pleased with them, but maintained that I must have been telling you fibs as to her goodness, etc. She said to me the other night, “You always have your way and you always will, and I love you all the better for it.” That’s the kind of girl to have – one that is reasonable. You

misunderstood the purport of my request when I asked you or suggested that you might write to her and tell her what you would like for her to do. I had reference solely to the time when you would like to have us come home and had not the remotest idea of your suggesting that she should interfere with my work. I am glad you didn’t write, if that was what you were going to do. I read her, however, what you said about it, and she seemed to side in with you more or less, but then she only did it to tease me. I saw your letter to Herbert when I was down. The reason he and Bessie didn’t say anything was because they didn’t know I had told you about it. I came home Wednesday night on the train. “Bonnie” surprised by boarding the train at Riversdale, the station below here and coming up with me. I then stayed with her to tea. They had fresh salmon (frozen) and a great supper. Today it snowed all day and this afternoon it became quite cold so that we are having a regular winter’s night tonight. About a foot of snow fell and the wind has been blowing so that it will probably be banked up pretty deep in places. I rather think this snow will stay with us and that we will have some winter in February. I wish we would. I am getting somewhat tired of the tameness of the winter so far. I was sorry to hear of Mr. Harvey [?] death and of Mrs. Royaler’s misfortune through the swindling operations of Gull. I feel sorry for the poor woman and think Gull should be tarred and feathered and set on fire. I took Mabel’s & Bikle’s letters with me to Bridgewater expecting to answer them, but was unable to find the time. I have so much to do that it is about all I can get done to write to you. As it is now half past twelve, I will say Goodnight.

With much love, I am 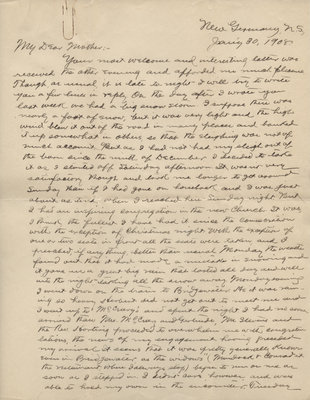