Your most welcome and highly interesting letter was received a few days ago and was read with much pleasure. I will try to give you a few lines in reply tonight. The muddy roads are over now and we are having a taste of fine old winter weather. Last Sunday it began to turn cold, though the day was very pleasant and I had good congregations all around. I preached here in the morning and the collection was more than double what it used to be on Sunday mornings in the old hall. People appreciate a nice church and like to come to it. Sunday night we had quite a snow storm. About five or six inches fell and if I had had my sleigh I could have come home with it. It had been snowing off and on ever since. Yesterday I took Mrs. Siever down to Riversdale through a blinding snow storm to see her newly married sister. I just got back tonight from making a call on one of my parishioners. I took Miss Phoebe Grenburg, my other woman, with me on this trip, and though there was a wild storm raging we enjoyed the sleigh drive all the same. I also took my little girl out for a sleigh drive today. She told me last night that she was just dying for a sleigh drive and as I didn’t want her to die, at least before we had our Christmas Service, I told her I would take her out today. She was perfectly delighted with the prospect and very profuse in her appreciation of it after it was over. I know she loves me; for she is always so animated and as happy as she can be in my presence and I guess if I called on her every night she wouldn’t think it was too often. She is one of the finest little girls I ever knew, and I really

didn’t think until lately that it was possible for me at this period of life to love any girl so well. She is young and pretty – just about 19 – and fairly well educated too having attended the college at Sackville for two years, and is quite a musician, having studied music ever since she was small, both on piano and violin. She is an excellent player on the latter instrument. At present she is teaching music and has 28 pupils here and in the surrounding country. She has been studying German under me since early in the fall and is getting along nicely. I could hardly help but love her after she so kindly came to my assistance in time of need, after I had lost my organist. And you would hardly believe the interest she takes in drilling the choir. Last week as few days before the evening for choir practice, she said to me “Now don’t you forget the choir practice” and the amusing part about it was that a couple of evenings later the Methodist practice came on and she forgot it and sent for me to come up and spend the evening which I did very pleasantly indeed.

If she were only a Lutheran I would marry her sure. But if I married a Methodist woman, while she was a Methodist, it would cause trouble, I am certain. And I don’t feel that I would be justified in sacrificing the interests of the Church to my own personal comfort and happiness. That would be selfish. And I don’t want to leave New Germany just now after having completed all my new churches for which I have sacrificed so long and so much. I have paid out more than one hundred and fifty dollars on the New Germany Church alone, and I would like to enjoy the fruits of my labour prayer and self-denial for awhile at least. Besides while the indebtedness is still considerable, I do not want to leave in the lurch my good and faithful parishioners who stood by me so nobly during the long and arduous struggle. I do not want to give any just occasion for offence and I couldn’t blame my people very much if they objected to their pastor’s marrying a Methodist woman. So you see I am in the midst of a pretty hard predicament. I think, however, that if I insisted on it

the young lady in question would join the Lutheran Church before hand and I suppose that is what I will have to do. If she consents to do so – well and good. It may still cause some trouble, but my conscience will be clear and I will feel justified in my course. If she doesn’t, the affair will have to be called off. That is about the resolution that I have come to. I mean to find out between this and Christmas. I am writing you all this in a confidential spirit and will count on you to say nothing about it for the present. And do not mention it when you write to Herbert or Bessie. If any thing comes of it I will tell you the name of the young lady. If not, it will make no difference. I would like to get married, because I know it would please you and I am under so many obligations to my dear good mother that I would like to please her in every respect. I cannot, however, make circumstances, but must take them as they are and hope for the best. I expect Herbert up to preach for me this coming Sunday and present the Orphan cause. I haven’t had much to do this week accordingly in the sermonizing line and have been utilising the time in visiting and endeavouring to work up a catechetical class here at New Germany. I want to begin as early after Christmas as possible and I think I have pretty bright prospects. I made no appointments for Sunday and expect to go with Herbert. We will very likely have good sleigh roads for the trip. I am getting along very nicely with my Christmas practice here and the children all seem to be very much interested in it. We have decided to enlarge our church paper, The Nova Scotia Lutheran, to a twelve page paper. It will mean more work, but I trust also that it will bring in more subscribers. The people seem to be well pleased with the paper so far. I wouldn’t like to give up preaching altogether, but I wish it were so that I could give more time to the paper. I think I could run a good church paper if I had plenty of time to devote to it. But when I return from my long rides on Saturday and Sunday, I am too tired to do good work for the first day or two in the week and toward the middle of the week and subsequently I must work on my sermons. I was very glad to hear that Bikle had secured a Government position. It will probably be permanent with opening for advancement

and will be pleasant work too. You might give me his address when you write again. I would to send him a post card of my Church and would like to hear from him also. I was surprised that you had to pay duty on those pictures. Our Government is more generous. There is no duty on photographs unless they are framed, and then the duty is only on the frame. I was glad to hear too that cousin Will Henderson had so good a position. I suppose Aunt Claudia is proud of her oldest boy. Your letter answered about all my questions as to the whereabouts of the various members of our scattered family. I often wonder if we will all ever meet together on earth again. God grant that we may do so in heaven! The Baptist minister by the name of Little in Lunenburg has begun the publication of a monthly religious paper called “The Sentinel”. It is very liberal in its views and is offered as a Christian Monthly for Christian Churches. It has as its motto the absurd statement “Doctrine, not Dogma; Christ not Creed” as though either one of these could go without the other. It is strange too for a Baptist to say as he does editorially “It is not our purpose to make war on other denominations. We have not yet arrived at the place where we think that every man who believes a little differently is a heretic” together with similar remarks in the same issue. “Sentinel” is a misnomer in such cases. The first number of the paper appeared in November. As I don’t want to get into an unprofitable controversy I have ignored its existence in my paper. I have never seen this Rev. Little. They say though he is a fine looking man. But it is a disgrace for a Little to be a Baptist. But since he is one I would respect him more if he stood up consistently for Baptist principles. This wishy-washy business of trying to please everybody at the expense of fidelity to the Scriptures I despise. But it is bed time and I will say, Goodnight.

With much love, I am 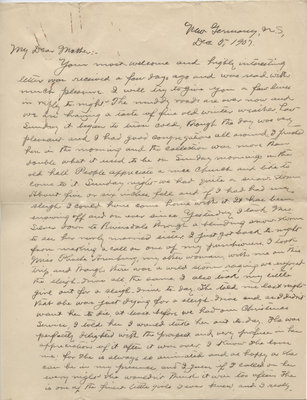