Your most welcome and interesting letter was received the other evening and was highly appreciated. I also received a nice letter from Pearl at the same time written from Dunn, N.C. As she speaks in it of visiting a friend at Dunham, N.C. and in consequence I do not know where to address her I will postpone writing to her for the present. She seems to be having a good time down there barring the heat and the mosquitoes. If she were here she wouldn’t be bothered with either just now, but would rather be suffering more or less from the cold. We have had frost every night now for quite awhile. The last two nights the frost was very heavy, re-

sembling a young snow and there was considerable ice. I have found it pretty cold sitting in the house without a fire, but by keeping the lamp burning most of the forenoon I have managed to stand it. I will try to stick it out till the first of October without fire, then the stoves must go up. But with exception of last Sunday which was rainy by showers we have had exceptionally fine, bright weather. Notwithstanding the rain I had my three services on that day though the attendance was small except here at New Germany in the evening where I had a fine turn out. After much tribulation I succeeded in working out in full notes of a pretty fair sermon on the Gospel for the day, whose keynote was, as you know “Don’t worry” (Matt. VI.24-34). And I preached it as well as usual, if not indeed a little better. But I find it about as hard to do anything this week. However,

in the places where I am to preach on the coming Sunday I will not be stuck and can substitute if necessary. But I generally feel that I ought to preach on the Gospel of the day and that if I don’t do it I am merely shirking a hard task for something easy. I used rather to prefer short texts but now I prefer long ones and find them far more satisfactory if I can handle them properly - especially if the Gospel or the Epistle for the day is taken. Next Sunday I will preach in Ohio and twice in my new church at Pleasant River. If the day is fine I can expect good congregations in both places – in Ohio because I preach there so seldom and in Pleasant River, partly perhaps because of the new church and our attractive service which is new in that section and partly because they have such poor preachers out that way. My congregation there is small yet, but it is thoroughly alive and I hope to see it grow considerably by next spring. Quite a number of people went from here to Halifax

yesterday to the Exhibition. Seventy tickets were sold at this station. Another cheap rate will go on next Thursday. If I can afford it I may take it in, as I have never been in Halifax and it is the Canadian Dominion Exhibition that is held there this year. Pearl seems to think a great deal of Mr. Hoad and says he is quite a religious worker and prizes Dr. Seiss’s Lectures on the Apocalypse. This, however, doesn’t signify a great amount of orthodoxy, as Dr. Seiss is decidedly millenarian and tries to explain things there which no man has ever yet been able to explain and will not be until those prophecies are fulfilled. However, there is, of course, a good deal of good sound doctrine in his books on that subject. But I could never get much out of Seiss except in the way of style. His language is always admirable. For the last few weeks I have been studying a good deal. I have read over all the Confessions except the Formula of Concord and

have about half finished Conybeare & Howson’s Life of St. Paul and have been reading St. John in the original with aid of Godet’s Commentary. I read without commentary the Greek and German New Testament through every year. I am finishing it the sixth time now and will be through by Christmas. I didn’t find it convenient to begin catechising any where after finishing at Pleasant River and this has given me a better chance for study. And that is what I very much need. If one merely gets out sermons week after week, he is not laying up anything for the future and is in danger of running dry after a time. And it’s hard to do much else when one has so much driving to do. I got a plan this evening from my Landscape Gardiner for the decoration of our church lot here. It is beautiful but I’m afraid too elaborate to carry it out in full. However, it need not all be done at once and may be carried out in time. You didn’t know I could write German poetry, did you?

If you can’t read this, maybe Prof. W.H. can. It is a L. M. Iambic stanza. If the first word of the last line is placed third the feet will be all correct and the rhythm perfect. But the sense of the thing is the main point. We are having plenty of apples and plums (Dawsons and the large white kind – what you know specifically as plums are not known here) now. The tomatoes were pretty well all killed by the frost, and very few ripe ones are to be had. Some however ripen quite nicely when put away in a dark place. Of late we have been having some roasting ears and have had one mess of cabbage. I was sorry to hear that Mabel had to give her position up. Hope she will soon come to rights again. With love to you all, I am 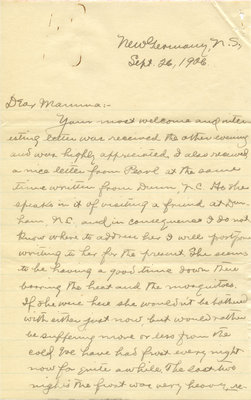