Creators
Carroll Herman Little, Correspondent
Candace Little
, Recipient
Media Type
Text
Item Type
Correspondence
Description
Handwritten letter from Carroll Herman Little to his mother on February 1, 1906. Little describes his life as pastor of the New Germany parish in Nova Scotia. In this letter, Little discusses the weather and the rescue of a man and horses from the water, upcoming funeral and weddings, and the Bethany Orphans' Home. Includes newspaper clipping featuring an image of Bethany Lutheran Orphans' Home.
Notes
Carroll Herman Little (1872-1958) was a Lutheran pastor, and a professor and administrator at the Evangelical Lutheran Seminary of Canada (later Waterloo Lutheran Seminary, now Martin Luther University College) in Waterloo, Ontario.

Your most welcome and very interesting letter was received a few days ago and was read with much pleasure. I will see what can be done toward answering it tonight. With the exception of one or two days which were fairly cold exceedingly mild weather has been prevailing. Everywhere there is plenty of mud and what ice there was along the edge of the river is about all gone. Even in the lake it is getting more or less thin. Yesterday a young fellow from here driving a pair of horses up the lake to see his girl broke through the ice, wagon and all and the horses were

rescued with difficulty. If there had not been an ox team handy it is likely the horses would have drowned. The harness had to be cut to extricate the horses, but little damage was done to the wagon. The ice on the lake last week was anywhere from 10 in. to 2 ft. thick depending on the locality, but there were bad spots in various parts of the lake and the ice has thawed considerably this week. I was up on the lake skating one or two evenings last week but did not go up this week because there was too much water on the ice. I think we will have it colder by to-morrow, as the wind has got around again and the clouds are moving in a south-easterly direction. It has been drizzly, cloudy, or foggy by turns pretty much all week. Sunday

was an especially nasty day. I got pretty wet that day, but made all my appointments and preached three times, though at North River and here at New Germany the attendance was quite small. I don’t care much what it does the rest of the week, but I hate to see bad Sundays. Tomorrow will be “Badger Day”. Then I guess we will be able to tell whether we will have any more winter or not. From present indications I think the badger will see his shadow all right and will go back and give us 6 weeks of winter. I hope he will for we haven’t had any yet. The thermometer hasn’t registered below zero but one night since the middle of Nov. and then it was only 8° below. It will make hard times around here if we don’t have more snow, as lumbering operations except the case big firms are dependent upon the snow. People don’t know

how to get their logs out without it. But if the old sign which everybody here puts faith in we are not apt to have much in February. The sign is that the last Friday of every month rules the next; and last Friday was a super fine day. I have been at home pretty much all week this week. The roads have been too bad for travelling where it wasn’t necessary. But it wasn’t very good weather for working, not being bracing enough, and it was only this afternoon that I succeeded in finishing my sermon. However, the rest of the week I will be pretty busy. I got notice to-day over the telephone of a funeral of an old man in Upper Northfield Midville parish. I will have to attend to it to-morrow. Then I was notified to come up to North River and marry a couple on Saturday afternoon. There won’t be much remuneration in it, however. The

North River weddings are hardly ever more or less than a dollar. But they marry early and often up there and mix up very closely. I don’t know whether you have seen a picture of our Orphans’ Home or not, so I enclose one taken from the Topton Pa. Orphans’ Home Paper, which also had an appreciative article about our Home. I think there will likely be a couple children for in the Home out of the family of the man whom I am to bury to-morrow, as both the father and mother have died within a year and they are extremely poor. The Home is handsomer that the picture, being prettily painted. I think that you were not quite fair in your remarks about Rev. Crouse. As to the new congregation down at [?], it is not probable that he organized it with the special purpose of having himself called as pastor. Though he would doubtless have accepted the position if called, I know

that he is not given to interfering with the congregation’s freedom of choice, and am sure that he would not seek a call. As to St. Stephens it is probable that his congregation will build a church there within the limits set by the court. And certainly there is room for improvement in the style of architecture over the present octagon round tower edifice. I protest also that it is not fair to say the Crouse is tearing down. He is a conscientious pastor and painstaking in his efforts at building up his people in the faith, and though he is not an eloquent or showy preacher, I have no doubt that his people are properly instructed and his congregation well supplied with the means of grace. I regard the Tenn. Synod’s action in taking up with a rebellious faction there and organizing them into a congregation as indefendible, disorderly, irregular and schismatical. Of course, I do not know how I would have succeeded down there, or anywhere

else for that matter except where I am. But if young Smith is successful over in Alexander Co., I see no reason why under similar circumstances I might not have been. Anyway had my lot been cast there, I would have done the best I could, and would have tried to hold my own if any of the neighboring clericals wanted to fight. I received a nice letter from Pearl to-night, which I must try to answer, as I have received two from her since I wrote. She proposes to send me a little side money that she has made toward one of my churches. I am glad to know that she is getting along so nicely and doing so well. Mabel, as you say, will not make a great deal but still it will be considerably better than nothing. What is the given name of the father of the baby called Carroll Herman Clive that Herbert baptized at Granite Falls? Does he

preach there regularly and how often? I was glad to hear that Uncle George has found work at last and hope he may do well. The poor fellow has had a hard row of it. But I guess I will have to stop here for this time. With love and best wishes to yourself and the new Misses Little, I am 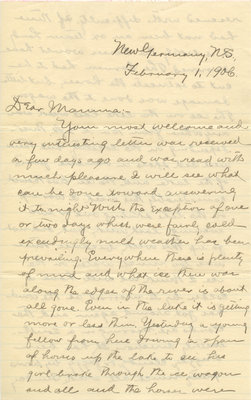