I suppose you celeb[?] your Thanksgiving day to-day. We didn’t celebrate as we had ours over a month and a half ago. We are still thankful only we look on the Americans as slow. But I hope that you are all enjoying the holiday. I spent the day in an effort at sermonizing, which so far has been only partially successful but which I hope to bring to completion before the end of the week. I heard the good news of the great event in Herbert’s family through a souvenir card of the “Little” family with a picture of the baby on it devouring an enormous piece of pie or swallowing it whole. I sent Herbert at once a congratulatory postcard in German script and dialect. I don’t know whether he could [r?] or not, but maybe the baby could. How does Herbert carry his paternal honours anyway? I guess they are both proud that it’s a boy. As for myself nephews are becoming quite common. I would just as like it had been a girl. A niece would have been something new. But as all

things come to him who waits, I may have them in profusion and plenty someday. However, jokes aside, I trust that both mother and baby are doing well. I was surprised at the Baby’s prodigious size. It’s too big to [?] with to spell with a small [let?] Little is a misnomer. Yesterday I had a visitor pretty much all day – the Rev. Rose, Congregationalist minister at Hemford, Pleasant River et al loc (classic for ‘and other places’). He came over to meet his father-in-law who came on the evening train. Mr. Rose, they say, is a rather poor preacher, but he’s a fairly pleasant sort of fellow, and I don’t mind entertaining him in a social way. Ecclesiastically, of course, we have no affiliations. At Hemford, where we have a church in common, they’re getting up a Christmas tree this year. Mr. Rose suggested a joint affair, but I told him I thought the best way would be for us to take it year about; that I would give him the right of way this year [?] would ask a free hand for myself next year. He thought the proposition fair enough and [?] to the plan. I will likely go out that night, but as I told Mr. Rose I will take my place in the congregation and take no part. I don’t like the idea they have out there of charging on this occasion anyway.

So far as I know now I will have no special services on Christmas day – the Sunday before Christmas coming so close to the festival that a Christmas sermon on that day will serve quite as well. It is sort of a puzzle to me why the 25th of Dec. or Christmas Day doesn’t come [?] this year, as it came on Sunday [?] and that was a leap year. But I suppose the almanac men know their business and I can form a reasonable conjecture myself about it. As I have received a fine overcoat and $20 in money this fall, besides a couple loads of hay, I feel that I have had my portion of Christmas presents already and am well satisfied and not anticipating more. Yesterday we had the biggest rain of the fall – the rain we’ve been waiting for and which I knew must come before we could look for settled winter weather. It never freezes up for good and all in this country till the swamps and lakes are filled to the brim with water and the streams have attained their winter proportions. Thus far this fall [?]. up to [?] it had been very dry. And while we had a few cold snaps, the weather on the whole was decidedly mild for this latitude at this late date in the autumn. It has been, I think, the longest and most beautiful fall since I’ve been here. Last Sunday was the finest day I think, I nearly ever saw so late in

November. It was a model of loveliness. In fact for several days along about that time there was quite a thaw. The ice came off the lakes and the frost out of the ground and we thought Indian Summer was here; and may be it was, though I’m skeptical about the [e?] of that season outside of the imagination of marvelous minds. But Tuesday was a cold day. That night it begin to snow, then it turned to “hail” (Canadian for “sleet”) and finally to rain. And it rained in great shape and the wind blew and the floods came. And tonight our mild roars like the rustling of many waters. It is many degrees colder to-day too and froze the ground even by day also formed ice over standing water. I haven’t been out to-night and don’t know what it’s doing, but we can expect cold now. I don’t care – I’m pretty well prepared for it this winter. I went out to Pleasant River Monday to see how the new church was progressing and came home Tuesday. They were getting along slowly but surely with it. In [a?] to the Gothic ceiling which I think was in when I wrote you last week, they now have the windows and most of the wainscoting in. And I can tell you the windows look fine. The ordinary ones are of vari-coloured Cathedral leaded glass with fleur-de-lys decorations and are the prettiest windows of the kind I

have seen. But the window of all windows is the Good Shepherd Memorial window in the Chancel. I had seen the window before it was set up and knew it was fine, but the gorgeous richness and beauty of it took even me by [?]. The figure is large – more than [?] I should say – and is a real work of art. I have seen many memorial windows grander and more imposing but none more artistic and handsome than this one. I am more than pleased – highly satisfied with it. I wrote to Clarence some time ago for $5.00 to purchase a pulpit edition of the Church Bk. for the church. He wrote me a letter and enclosed the money the other night and I have ordered the book. Incidentally he preaches up marriage. I don’t know what his wife pays him to do it, but I’m glad he’s not tired of his ‘woman’. I am greatly disappointed over not receiving the Bible sent by Betz and the crucifix sent by St. Paul’s congregation, Trenton, N.J. According to Betz’s letter the Bible was sent from Phila Nov[?] to him last week but haven’t heard. I also made inquiries in the various Customs Houses to no avail. And the other day I wrote to the Express Co. about it. But I doubt very much if I will receive it now any more. The crucifix has also been 15 days on the road from Trenton, N. J. and no word from it. I wrote the pastor

there about it about a week ago, but have received no further word. I have about given it up also. Mr. Chas. Veinat, Mr. Veinat’s oldest son was married this week. He married a Baptist [?] whom he had been going to see [?] year, and as she is a [?] get the job. But I don’t hardly think she will turn him. One of Mr. Will’s girls at North Brookfield is to be married Dec. 6th to the Rev. Weagle, a young clergyman of the Church of England. The girl holds Lutheran but was never confirmed. She would have liked to have me to marry her, but the Church of England rules forbid their clergymen to be married by a minister of another denomination, and I don’t quarrel with the rule. I haven’t had any marriages this year – not one since 1905 set in. Miss Phoebe Greuburg received a letter from the Haiglers and a picture of little Helen taken since they went to South Carolina. The little girl looks more active and stronger than she was, but doensn’t show that she has grown much. Well I must [?] this time. With love and good wishes to you all, I am 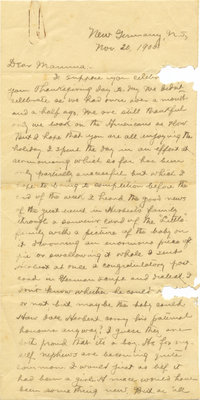