Your most highly appreciated letter received the early part of this week. I wanted to answer it before now but didn’t have the time. Last Saturday evening I went down to Roanoke and spent the night at Mr. G [? ]. I had a very pleasant visit down there, met Miss Mary Funkhouser, a sister of Mrs. Ferguson nee Funkhouser, a very pretty and pleasant young lady. I also saw Mrs. Pall and Mrs. Gallingher and Mrs. Ferguson. Mrs. Grider said she hoped she would be at home when you come up into Virginia, but she didn’t know as Mr. G [?]’s sister died a short

time ago and the old folks are so cut down about it that Mr. G [?] wants to take his family up and spend the summer with them. She said she didn’t know whether they would leave before the 18th of June or not. She said she would let me know. She seemed to be very anxious to see you. Saturday night I took in a little opera down at Roanoke. It was right good. I don’t believe I’ve had any examinations since I wrote you last tho’ I have one for Monday and another booked for Friday and [?] [?] for another one or so this next week. But the fun of it is that this next week is the last. I am beginning to feel good over it already. I think I’ll be able to make a first distinction without any trouble. As to whether I will make the first grade in the class I don’t know. I don’t reckon I’ll be left very far behind however.

The commencement exercises have already been published in part in the Luth. Minister, I understand. Haven’t seen it, however. Dr. Archer hasn’t returned yet from the north. Dr. G. W. Holland Pres. Of Newberry College is to preach the baccalaureate sermon. Cleveland’s preacher and a crowd of [?] men are to be present I’m told. I received an invitation to attend [?] college commencement the other day. I see Cyp Efind is to deliver the address before the Societies, I don’t know yet who we’ll get. Dr. Archer will bring in some one tho', I guess. I think we’ll have a right successful commencement this year, hope so at least; but don’t

believe it will come up to last year’s. That class was an unusually bright one, last year. The new Luth. Preacher that they’ve got down at Roanoke is driving most of the wealthy people out of his church. I believe I told you sometime ago about the Terrys all leaving the church and joined the Episcopals. Terry is the richest man in Roanoke. They say that most of the Trouts are going too. They are also quite wealthy. They say the preacher is quite personal in his sermon. [?] [?] either and preaches against theatre going, dancing etc and he won’t wear a robe, which they’ve been used to down there. You see its Trouts and Terrys are the principal stock holders in the new theatre down there, and they, of course, don’t fancy a preacher’s running down their business. They had a town election here the other day on the prohibition ques-

tion and the town went dry by 17 votes. The barrooms will have to close up after today. There was considerable interest in the election and it was hotly contested. Last night I attended the Phi Gamma Delta banquet at Hotel Salem as an invited guest. It was quite a swell affair as I expected it would be. I took a young lady out. The Gammas did everything up [?] and sent carriages around for us. There was quite a large crowd present and nearly all the pretty girls in town. It was a banquet gotten up for Sec. 3 of Phi Gamma Delta fraternity. This comprises all the Gamma chapters in Va. & N.C. and boys were here from nearly

every college in Va. and also two from N.C., one of whom Mr. Sawyer I met as I went home Xmas. It was a full dress affair. You ought to have seen me in full dress, wearing diamond studs. I cut quite a figure you can imagine. I sent you enclosed the bill of fare. You will see that I responded to the toast Phi Delta Theta. I acquitted myself much better than I expected. Some of the ladies and others told me that I made the speech of the evening which while no doubt partly flattery wasn’t displeasing to my ears, I tell you I got the cheers tho – all I could wish for. They didn’t even wait for me to get done before cheering. I think that enthused me more. It was a most enjoyable evening – about the pleasantest I’ve spent here. I enjoyed it ever so much. The banquet broke

up between 2 & 3 o’clock in the morning. There was dancing & promenading in which latter I engaged somewhat. I don’t believe I ever saw so many real pretty girls together; there are lots of them here in Salem, if a fellow only knew it. I notice in the paper that the P.O. at Hickory will be in its present hours till May 1894 if the present P.M. is allowed to remain his 4 years only, which is very likely unless it can be shown that he has been mixing in politics pretty freely which so far as I know he hasn’t. I don’t reckon you are doing everything in that relation now, Have gone [?] bank building [?] at all now? I believe I

saw in the paper a good while ago that [?] had moved out and also the Bank. I reckon the prospects are not bright for his [?] of it. I guess you did have a right nice time in Dallas among your old friends there. I am sorry but don’t think I’ll have time to write to Aunt [Claudia?] before exam. I will send her an invitation tho'. Hope you remembered me to your friends in Dallas. I would like to see Charley [?] & wife; guess they are a loving couple. I will sign the receipt you enclosed and return it as soon as you send me the money. I am needing some and would like to have a little a least right away if convenient for you to send it. I would suggest that you have [?] [?] to have his life insured for your benefit – if you loan him money without security. I know if he lives he will make a success of his trade and

[Written across top of page : Please preserve the Enclosed Banquet bill of fare]

would soon be able to pay all the money back which you might loan him, but this would provide against any accident of fortune which might occur to remove him hence. We are having some warm weather now but it is quite windy. I think summer has set in real earnest now. Tell Blanche I’m still waiting to hear from her. Well I must close. Hope you’ll be able to read this letter. I have a very poor pen and can't write much anyhow, I am feeling might sleepy today, didn’t sleep but about 4 hrs. last night.

Love to you all, affectionately 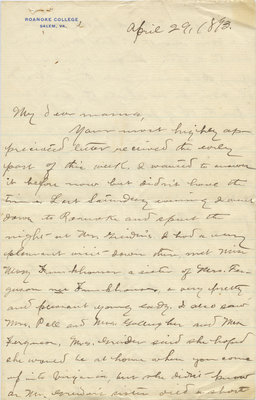