Media Type
Image
Item Type
Photographs
Description
Black and white photograph of the 1968 Miss Canadian University Queen Pageant held in the Theatre Auditorium at Waterloo Lutheran University. Contestant Elizabeth Chapel, Miss University of Windsor, is walking with her escort. She is wearing a formal gown and sash. A man is standing on the left, holding a movie camera. Spectators are seated in the background. Chapel was selected as the winner of the pageant. 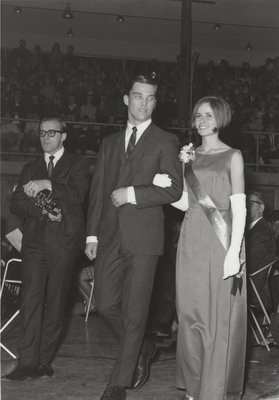