Media Type
Image
Item Type
Photographs
Description
Colour digital photograph of the main floor of the Wilfrid Laurier University Library. On the right is a sculpture. On the left is a curved wall. There are bookshelves in the background.
Notes
The Wilfrid Laurier University Library, a seven storey building located on the main campus, was constructed in three phases. Initial construction began in 1964, and the three storey Library opened in 1965. Construction phases 2 and 3, completed in 1971 and 1984, added the fourth through seventh floors. A major renovation took place in 2002. 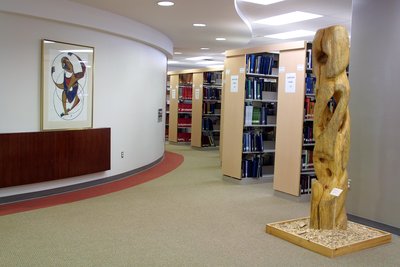