The time had come for the Norwegian car- go ship Mosdale to sail from Montreal and the captain, 30-year-old Gerner Sunde, was anxious to get away. But there was a diffi- culty that day in June 1941. Fern Blodgett, 22, had just reported aboard as the new wire- less operator -- and nobody seemed to know whether a wartime ship could sail with a woman in the crew.

Canadian and Norwegian authorities could find no regulation which said a ship could. Nor could they find one which said a ship couldn't. So it was ruled that, if the captain was willing to take her, Miss Blod- gett could go. The captain had no alter- native. She was the only wireless operator available. By the time a counter-order came through, it was too late. The girl who had wanted to be a sailor all her life was on the high seas.

She remained there through most of the Battle of the Atlantic. Mosdale made 98 war- time crossings, more than any other Allied ship, and Fern Blodgett was aboard for 78 of them. But from July 1942 on she sailed as Mrs. Gerner Sunde. She married the captain in Saint John, N.B., and promptly went back to sea for her honeymoon. She recalls:

… I grew up in Cobourg, Ont., and as a Young girl I'd go down to the shores of Lake Ontario to watch the lake boats pass. They fascinated me. I even loved the sound of their whistles. Then it would come over me that I was not a little boy, and I'd go unhap- pily back to my dolls. But I never got over wanting to be a sailor.

When the war came, I thought I saw a slim chance. I was a stenographer in To- ronto but I had my evenings free -- and sure- ly there would eventually be a need for sea- going wireless operators. I applied to three schools that gave wireless training. Two said they had never had a woman student and they didn't intend to start now. The third accepted me. After 18 months of night classes, I was a trained operator.

Not long after that, the school principal phoned me. "You once told me you'd like to go to sea," he said. "Did you mean it?" That night, Friday, June 13, I was on a train to Montreal.

My life in Mosdale, a 3000-ton ship with a crew of 35 and room for 12 passengers, took some getting used to. I got violently seasick. I had hoped to fix up my cabin as any girl would but I had to give up. It was too small. I loved it anyway. I wondered what I'd be like in a crisis if we were attacked by submarines or surface raiders or bomb- ers. I wondered whether I would be a woman or a wireless operator if we were torpedoed. As a woman, I could be expected to head for the lifeboats. As a wireless operator, as the ship's "Sparks," I'd be expected to remain on duty. I decided I'd be a wireless operator.

Fortunately, I never had to test my deci- sion. There was always the threat of danger and toward the end of the war our nerves got pretty frayed. Submarines chased us. We had torpedoings around us, passed through storms which scattered the convoy, once changed course unexpectedly and passed through a minefield our charts didn't show.

But Mosdale was a lucky ship. She was one of a half dozen Norwegian fruit carriers that started the war -- and the only one to survive. She could make 15 knots and for a long time that was enough to let her sail alone because she could outpace any sub- marine. None of us liked it when she was as- signed to convoys and had to reduce speed.

My mother and sister sometimes tried to persuade me to stop going to sea. I couldn't. I liked it too much. I liked the crew. I en- joyed the passengers we carried: correspon- dents, technical experts, an African explorer, servicemen, merchant seamen who had been torpedoed. Besides, it wasn't at sea but on land that I had my worst frights -- trying to pick my way back to the ship through black- outs in British ports.

I finished the war as Mosdale's "Sparks" and remained with her for another six months. Then I went ashore to stay. I've made my home in Norway ever since. Oc- casionally I meet other Canadian women who followed my example, not only in going to sea in wartime ships but in marrying Nor- wegians they met on board. But so far as I know I was the first.... FERN SUNDE 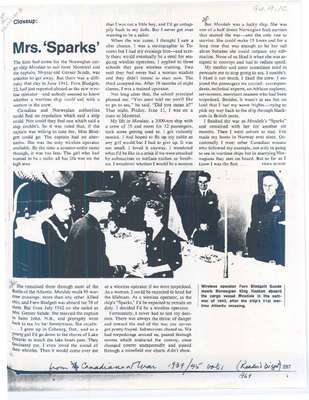