Winchester-Western (Canada) Limited, a unit of Olin Corporation, formally opened the doors of its new Cobourg, Ontario, headquarters offices and sporting arms and ammunition manufacturing plant with a dedication ceremony on Thursday, June 11 at 2:00 p.m.

Harlow J. Reed, Executive vice-president and chief operating of- ficer of Olin Corporation, formally dedicated the new 86,000 square foot facility with a symbolic firing of the first Win- chester shotgun produced at the plant. "I am pleased to be here and commend all concerned with the success of this plant," he said. "The co- operation of the town and government is com- mendable."

John E. Feldhaus. president and general manager of Winchester- Canada cut the ribbon to formally open the new plant. He stressed Winchester's faith in Cobourg and its com- munity of employees and friends. This relationship with the town was an important consideration in the expansion of the Company's product line and base of operations in Canada. He praised the support of the employees for their support of both Winchester and the community.

Other guests from the town and province, in- cluding Cobourg coun- cillors, the Chamber of Commerce and town officials, joined in marking the occasion with members of the press and company representatives.

Following the formal dedication, the guests were conducted on special tours of the new plant and offices which are located in Brook Road north.

In noting that the new Winchester plant will be an invaluable asset to a growing Ontario, Cobourg Mayor Heenan re-affirmed that Cobourg's friendly relationship with Win- Chester-Western and its employees over the years will continue to grow. He emphasized that both Cobourg and Winchester- Canada are full-fledged partners in Ontario's future.

The Cooey Firearms Company of Cobourg, one of Canada's oldest and most respected names in firearms, was purchased by Winchester in 1961. Winchester-Canda was established at the time for the manufacture and marketing of Cooey and Winchester sporting arms and ammunition in Canada.

Speakers at the dedication renewed the invitation to residents of the Cobourg area to visit the plant as part of the celebration of Cobourg's Winchester Canada Day, which was officially proclaimed by Mayor Heenan. 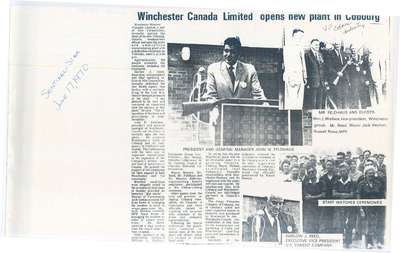