THE LATE MAJOR TAYLOR, Cobourg, Ont., was born January 31st, 1810. He is the son of John Taylor and Flora Mackie. After receiving a good practical education, he turned his attention to military life and took a first-class training. In 1827, he sailed for Madras as cadet for the East India Company, where he remained twenty-five years, returning as full major. He carne to Canada in December, 1851, settling at St. Catharines, where he lived retired about fifteen years. He then removed to Cobourg, where he resided up to the time of his death, which occurred September 2nd, 1887. The major enjoyed the distinction of being one of the finest military men of Her Majesty's service, his foreign career and long experience giving him an advantage which very few possessed. In religion, he was a member of the Church of England; in politics, a Conservative. He was married December 20th, 1852, to Charlotte Nelles, of St. Catharines, Ont., daughter of Col. Nelles, a well-known settler in that district. He left a widow and one son, Louis, the latter a rancher in California. 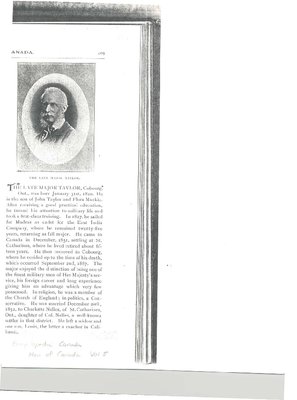