The proposed extension to the Cobourg Public Library will cost more than the board originally estimated, according to estimates being received by the board from construction forms.

The board will meet with town council at a special meeting Tuesday evening to discuss the additional financing of the addition, which is badly needed.

The new extension, which would extend from the front of the existing building for one storey with basement, would house a new junior library and reading room. The basement would be unfinished.

The consulting architect has told the board costs may be cut by leaving out the basement of the construction but the board has pointed out that a basement is the only space available for further expansion. The board does not think it is practical to make the extension windowless.

The library board originally planned an extension over a year ago. The town council approved a $3,000 expenditure in this year’s budget. However, the additional costs will be discussed at the council meeting Tuesday evening. 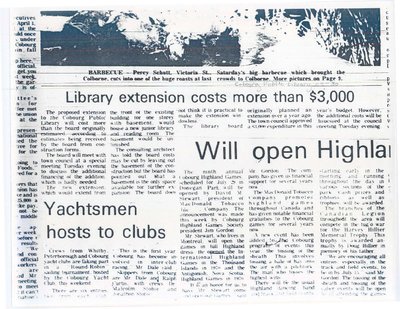