Home (Advanced) → What's New → Details
Letter to J. Keiller Mackay from G. R. Barnett, regarding his submission to the Ontario Council for the Arts.
Description
Comments (0)

I beg to enclose fifteen (15) copies of our submission to the Council.

Our records are at the disposal of the Council. The members of the Board and of the Staff would be glad to supply and further information which they could give.

1. Under the authority of the Board of Cobourg Public Library Art Gallery, I beg to make this submission.

2. The Council is already familiar with our genesis and history; on the basis of the 1967 submission it made a grant of five hundred dollars ($500.00) towards the general maintenance of the Art Gallery.

3. It is quite manifest that the geographical position of Cobourg with its established Art Gallery, is a natural centre for a very large and lively development of cultural life. In reviewing the potential of the situation, it might be a temptation to launch grandiose schemes for which presently we are not adequately geared, yet even a beginning would entail most careful planning and promise rich results. According to the last available statistics of the Lake Ontario Development Association, Cobourg serves a population of roughly seventy-five thousand people (75000) although the Town itself has only eleven thousand one hundred and sixty-six (11166) inhabitants. But the figure may be conservative, for undoubtedly the number of villages and smaller towns in the district do look to Cobourg for many services; we are aware of this daily in the Library, for there are members from as far east as Brighton. To the Gallery come visitors from Belleville and Trenton, Bowmanville and Newcastle and Peterborough: the visitors’ book declares as much.

4. The Town has two large Collegiates – about 1500 students – and classes from them visit the Gallery three or four times a week during exhibitions: there are four public schools – 1648 students – and three separate schools – about 950 students. The Opera and Drama Guild which operates in a celebrated miniature opera house over the Magistrate’s Court in the Victoria Hall opened by Edward VII when Prince of Wales, has been presenting plays for many years, sponsoring drama festivals and community concerts and touring companies during winter and summer. A small symphony orchestra struggles valiantly forward. While the ballet class is technically a private venture it has never been run for private gain; it has done a very great deal indeed, for the children of the district under its most able, professionally trained, teacher. There are two or three gifted teachers of music, and one exceptional harpsichordist who has given recitals in the area, the first sponsored by the Art Gallery.

5. Cobourg has been especially fortunate in one direction, for it enjoys what most communities do not, and it has not been slow to recognize its advantage. A professional artist resides in town. Mr. Peter Kolisnyk’s work is not only in private collections, it has been bought under the immediate direction of Mr. Bryan Robertson of the Whitechapel Gallery in London, for the Centennial Exhibition, it has been shown in the Jerrold Morris Gallery and, at the time of writing, is being exhibited in the Pollock Gallery in Toronto. From the latter, the Art Gallery of Ontario has purchased three works: two other commercial houses have requested Mr. Kolisnyk to show in the future. It is seen, of course, in the usual annual exhibitions of professional societies. Mr. Kolisnyk’s activities range over an area bounded formally by Belleville, Peterborough, and Port Hope, but engagements take him further afield. He has classes in the towns cited besides the one in Cobourg. His studio is a centre for all age groups: he and his work have sparked a vivid response in a large neighbourhood, and his home is a focal point for informed discussion.

6. What role has the Art Gallery itself played, what effort has it made which would warrant assistance from outside?

A glance at the appended balance sheet will indicate the financial outlay in 1967, and the proposed budget for 1968. To say the least, some of the items in the latter are minimal. One seventh of the Chief Librarian’s salary only, for example, is allotted to Gallery direction, and it is doubtful if a caretaker of any gallery existing physically apart from the Public Library could be procured for the salary shown. It will be noticed that out of the total budget for 1968, only $200.00 has been set aside for acquisitions. This appears trivial – and indeed it is – but it is also deceptive. The sum must be set down in this manner, for that is how it appears in the overall budget of the Library and Gallery; the Board regards its primary task as the establishment and maintenance of the Gallery, to provide a context in which works of art may be shown as they are acquired from any source, the $200.00 being merely a token involvement in the collection itself, a token (under the circumstances) difficult enough to give. The Auxiliary will spend a minimum of $750.00: from a private source another $500.00 is guaranteed, the same donors having already given two paintings to the value of about $800.00. The total sum to be expended on new acquisitions in 1968, therefore, will be at least $1450.00: this does not take into account further gifts and money raised by the Auxiliary. All this too is negligible, but added to the operating expenses of the Gallery, the sum total effort on the part of a small and scattered community is not.

Apart from raising funds, the Gallery has been anything but inactive. Each year 9 exhibitions have been held: the Art Institute has provided the major number, but those organized locally have been most rewarding. Each exhibition (which lasts as a rule for two weeks) has a preview for Auxiliary members and guests, and each draws on an average somewhat over five hundred (500) visitors, the Gallery being open during Library hours. The Cobourg Collegiate visiting classes have been mentioned, and public school students and all members of the Junior Library are daily encouraged to see each display, a special discussion tour being arranged for the latter on the Saturday after each opening. A radio review is given of each exhibition, and two newspapers carry reports. When possible, on the Sunday after an opening a discussion period is held. During the period of the year when there are no loan displays, the embryo permanent collection of thirty pieces is hung which attracts visitors from out of town besides those from the area.

7. The above is a brief statement of what has been accomplished. But it is only a beginning.

It would be foolish to plan in a sumptuous idiom, for while what already exists would be patient of expansion to an almost limitless degree, discretion would dictate a consideration of what could be developed on the already secure foundation, and secondly what is relevant to immediate needs. The former is clearly defined in a) the Art Gallery, b) the embryo collection in it, c) the already established programmes and routines, d) the lively interest in the whole area in the visual and dramatic arts, e) Mr. Kolisnyk, f) Mr. Kolisnyk’s studio and the impact it makes on the community as a whole.

And now there are the immediate needs: they can be stated succinctly.

A. Cobourg, with the Art Gallery as the “base”, should have some officer to “pull together” all the various forms of aesthetic expression in the area, concentrating primarily for about three years, perhaps, on the visual arts which would cover those in application to the theatre and ballet; a very modest beginning might be made on music, to exploit the basic record collection in the Library – it includes plays: many are to be added in 1968 – and the new record-player in the Gallery, together with some “live” music by individual instrumentalists such as Frances the resident harpsichordist. Work calls to be done not only among the adult and junior members of the art groups, but also with the Collegiates and the Pubic Schools in which there is not even an awareness of what is being shown in the galleries and museums of Toronto, for example, and where there is no highly trained personnel to give adequate guidance at local exhibitions. Informal lectures and film showings could play a part, and professional artists should be encouraged to show in Cobourg. It should be pointed out that the work of professional artists shown in Cobourg has been bought both for the Gallery and privately.

B. The permanent collection must be expanded not only in original material in the areas of painting – in different media – and in sculpture, but also in stills and, if possible, slides: the Gallery has a built-in screen. This total expansion is a sine qua non to the whole development.

It is true that to be helped an area must help itself, but there is a stage in the formation of a collection in a certain milieu such as Cobourg (where effort is certainly manifest) at which help is essential; a considerable period of helping may be required, too, at this stage until people, industries, service organizations, in greater number, see that a gallery signifies as profoundly as an arena. To reiterate the need for outside assistance in education as it is popularly understood, and yet imagine that education in the aesthetic will mature overnight without outside assistance, is an odd way of looking at things. While a plea for semantic precision may appear pedantic at this stage, one does wonder sometimes what “outside assistance” does mean: it would seem that the word is relevant only when a formal group is non-participant in contributing to the common purse.

A pilot project of this nature could not be initiated and established securely without financial assistance to cover the following needs which, it will be seen, are apart from those already subsidized in Cobourg, nor would it have to cover office and storage expenses met by the Gallery.

3. Public relations: publicity in radio, newspapers and, if possible, in TV.

6. The broad development of the Gallery permanent collection to provide

rotating exhibitions in the different centres of the whole area.

To carry out this pilot project, it is suggested that the required sum would be in the neighbourhood of twenty-three to twenty-five thousand dollars ($23000.00 - $25000.00) per annum, and it is for that sum application to the Council is now made.

Prejudice, bias and enthusiasm, are inevitable in any submission such as this, yet a dispassionate survey of the situation which obtains in this area by a trained and detached eye, might well endorse the thesis with the corollary, perhaps, that it is too conservative. 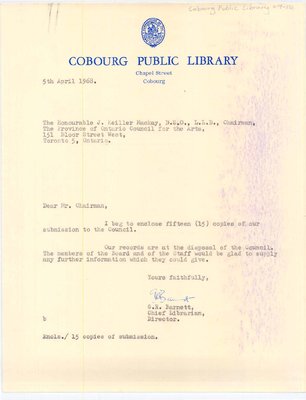