EXECUTIVES - The executive group of Winchester Canada met with the new president and general manager on Tuesday at the Cobourg Golf and Curling Club. R.R. Bucher, appointed a few hours earlier, comes from the East Alton, Illinois plant, near St. Louis. He is shown above, front, centre, with T.E. Hazelwood, director of marketing, at left, and R.W. Leavitt, Winchester Group, vice-president, international operations.

Mr. Bucher arrived in Cobourg Tuesday morning to meet the company management and staff of 250 at the Brook Rd. plant. At noon, the executive group of the company visited with him at lunch at Cobourg Gold and Curling Club. He was accompanied by R.W. Leavitt, vice president, international operations of the Winchester Group of Olin Corp., the parent company of the Cobourg rifle and ammunition manufacturer.

Mr. Bucher expects to move his wife and four children to Cobourg during the summer. AT present, they are at East Alton, Illinois, where he has been director of engineering for the ammunition operations of the Olin Winchester-Western division.

Mr. Bucher was born in Kansas City, Missouri, and attended Kansas City Junior College and Kansas University. He graduated in mechanical engineering in 1953. He earned a B.Sc. in meteorology from University of California in 1954 and a master’s in business administration from Xavier University, Cincinnati in 1962. He serves as a captain in the U.S. Air Force. He was also a lecturer at University of Kansas and at Purdue University.

The new Canadian president joined Olin in 1968. He has 20 years in industrial management, including tow years with Allis-Chalmers Corp., and 10 years with General Electric.

A trap and skeet shooter and hunter, he has been active in Chamber of Commerce, Boy Scout and church activities.

Mrs. Bucher is also from Kansas. Their children are Kathryn, 14, Elaine, 12, Melissa, six, and Richard, four. 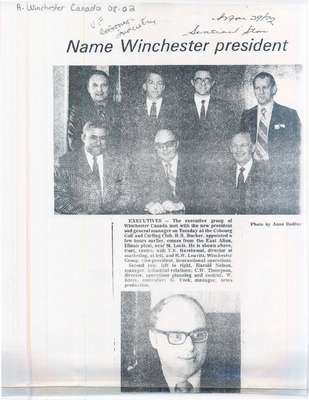