Trenton Air Station: Dec, 20
(STAFF) In the white wards of the RCAF base hospital here, the 44 passengers of the ill-fated plane which crash-landed successfully near Cobourg today—waited for a chartered bus to take them on what they hoped would be the last lap of the trip to Newark, N.J.

Eva Childs, who with her husband, Charles was in Berkeley; California, to attend their daughter’s wedding, told the story of what she termed “the worst week I’ve ever spent.”

According to Mrs. Childs, the flight was scheduled to take off from Burbank at 3:30 Monday afternoon. Flight time was advanced to 7:30 p.m., and finally the flight was cancelled until Tuesday morning.

“We spent the night in a motel in Burbank,” said Mrs. Childs, “the Company paid the overnight bills. Tuesday was a tough day. We spent it standing at Burbank Airport. They kept telling us our plane would take off in just another 15 minutes so we didn’t dare leave the waiting room for a decent meal. We were afraid we would miss the flight.”

It was late afternoon when the flight finally took off, Mrs. Childs continued.

“But we didn’t go very far,” she said, “We landed at a place called Palmdale, smack in the middle of the desert and we sat there until midnight Tuesday. Nobody gave us any explanation as to the cause of the delay.”

Flight Conditions were better Wednesday. The plane landed at Albuquerque, Kansas City and finally Chicago. Five more passengers boarded the plane at Chicago Airport and the flight left there at 3 a.m. Thursday Morning.

“Today we had a crash before breakfast,” continued Mrs. Childs. “I got out of the plane and asked (?) said. “She’s happy as a sand flea but I’m not. My husband has only seven days leave, and it started yesterday.”

Another wife with a husband on leave was Mrs. Jerry Halloway of Los Angeles. Her husband, Master Sgt. John Halloway with the Marine Air Corps, has just returned from Korea.

“It’s been more than a year since I last saw him,” she said “I’m still so far away. He is at Cherry Point Air Base in North Carolina. I hope I make it there for Christmas.”

“Sandy Daine, the stewardess has been wonderful,” Mrs. Halloway said, “Fasten your safety belts and pray,” she told us. And then she walked down the aisle, calm as anything to see that the belts were properly fastened.”

It was the second forced landing for Miss Daine. Last April she was on a plane forced down in Georgia during an electrical storm.

“We all walked away that time too,” Miss Daine said. “I’m not superstitious, but I hope these crashes don’t come in threes.”

“I knew for almost three hours before we landed that the motors weren’t right,” she said. “I knew we would have to come down, and all I could think of was how I wanted the passengers to be all right. And I got my wish.”

Anita Ciceri, 15 months, and Lynn, 4 months daughters of Mr. and Mrs. Richard Ciceri, of Los Angeles, were the other two infants aboard. Like baby Thompson they both slept through the landing.

“Anita has laryngitis,” said her mother. “They were just wonderful to her here at the station. Nurses took both babies from me bathed them and put them to bed. They even gave Anita a shot of penicillin. She had been sick all the way from California and it was quite a tough flight.”

“This is my first visit to Canada,” Mrs. Ciceri continued, “I am meeting my in-laws for the first time, in Montreal, my husband’s old home. I am a native Californian and I have never seen snow before this trip, except in the movies. I am having a wonderful time and I think Canadians must be the most hospitable people in the world.”

Mrs. Ciceri praised the crew and particularly the pilot. “When the pilot walked out of his compartment after we landed,” she said, “we all burst into applause. We were all tensed up, but we thought he did a wonderful job, and I tell you he looked a mighty big man to us.”

One passenger, 75-year old Mrs. Ethel L. Kloeber, who was going to Arlington, VA, to spend Christmas with her son, had to be persuaded to leave the plane.” I paid my $101.20 for this trip,” said the striking grey-haired lady, “and I wasn’t going to eng it somewhere in somebody’s back field.”

There was a strange reunion at the RCAF station last night. A U.S. Air Force major, and exchange officer at Trenton—noticed one of the plane’s passengers had a distinct German accent. She was Mrs. Helga Coleman returning to Brooklyn to join her army husband on leave from Korea.

In the course of conversation, the major found she had been in Hanover, Germany, in 1943.

Mrs. Coleman said she had been there that fateful day, and added without comment “my sister was killed in that night’s bombardment.”

In addition to the three babies counted originally among the stranded passengers there were three small boys. They are: Pete, 3, Larry, 6, and Bill, 9, sons of Mr. and Mrs. Morris Steinber of Brooklyn, N.Y. They slept away the early evening hours in the RCAF station here. Around 11 o’clock with the bus waiting to take the passengers on to Newark, the three youngsters played hide and seek down the hospital corridor.

Later it was learned that Stewardess Sandy Daine had celebrated her 24th birthday in the crash landing. 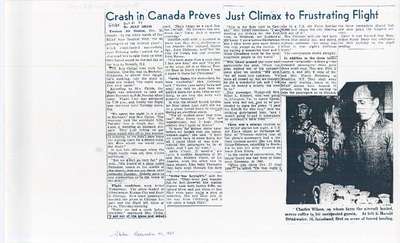