Full Text
In the Surrogate Court of the United Counties of Northumberland and Durham
IN THE ESTATE OF John Waldie
Of the Town of Cobourg in the County of Northumberland, Retired Baker, DECEASED
UPON READING THE APPLICATION OF William Beattie and James (?) the certificate of the Surrogate Clerk and the affidavits and papers filed in support hereof, and the report of the Registrar thereon, I do order that Letters (?) issue to the applicants
DATED at Chambers this 16th day of April A.D. 1909

The Succession Duty Act (Ontario)
In the matter of the estate of John Waldie, deceased, late of the Town of Cobourg, in the County of Northumberland A.D. 1909

This is Schedule “A” referred to in the Affidavit of Value and Relationship of William Beattie and James (?) Sworn to on the 16th day of April A.D. 1909

The Succession Duty Act Ordinance
In the matter of the estate of John Waldie, deceased, late of the Town of Cobourg, in the County of Northumberland, Retired Baker


This is Schedule “B” referred to in the Affidavit of Value and Relationships of William Beattie and James Francis Keith, sworn to on the 16th day of April A.D. 1909


A
This is the last will and testament of , John Waldie, of the Town of Cobourg, in the County of Northumberland, retired baker, made this eighteenth day of December ,in the year of our Lord one thousand nine hundred and five.
1—I revoke all former wills, or other testamentary dispositions, by me at any time hereto- fore made, and declare this on to be and contain my last Will and testament.
2—I direct all my first debts, and funeral and testamentary expenses, to be paid and satisfied by my executors hereinafter named, as soon as conveniently may be done after my decease.
3—I will and direct that my executors shall pay to the parish of the Presbyterian Church in the Town of Cobourg, of which the Reverend William Bealty is now the (?) pastor, the sum of two hundred dollars, to be used for such church purposes as the proper authorities of said church shall deem proper.
4—I further direct that the monument I have ordered from P.E. Delanty, to be erected over the graves of myself and my deceased wife, shall be paid for out of my estate, in case payment is not made for same during my lifetime
5—after payment of the money, hereinbefore mentioned, and any other proper and legal claims against my estate, I give, devise and bequeath to my daughter, Mary Ann (?), wife of Philip J. (?), all the rest, residue and remainder of my property of every kind, constituting mainly of my real estate on the north side of (?) street in the Town of Cobourg, east of the (?) Block and west of the Albion Hotel property, and leading in a southerly direction to the south side of Swayne Street, and of my household, furniture and effects, and of certain money to which I am entitled from the estate of my deceased wife, Mary Waldie, but I (?) my paid real estate with the payment to my daughter, Jemima Collins, wife of William J. Collins, of Cobourg aforesaid, of the sum of twenty three hundred dollars ($2300.00) in manner following, that is to say: the sum of five hundred dollars at the end of each of the first four years after m decease, and the sum of three hundred dollars at the end of the fifth year from the time of my decease.
The said legacy not to bear any interest until the said installments respectively become due, and then only from the time default shall be made in payment until the payment or payments is or are made, and the rate of interest to be paid to be the then current bank rate of interest.
6—I hereby nominate, constitute and appoint the Reverend Wm. Bealty hereinbefore mentioned, and James Francis Keith; of the said Town of Cobourg, Barrister-at-law, as the executors of this my last will and testament
In writing whereof I have hereunto set my hand the day and year first before written.
John Waldie

We hereby indentify the within as the Last Will and Testament of the late John Waldie, deceased, referred to in the annexed Petition and affidavits.
James F. Keith
Wm. Beattie 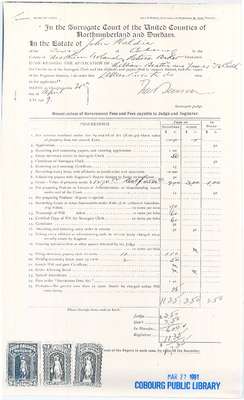