"The whole character of this town is wrapped up in that one building". Mayor Jack Heenan of Cobourg said as he looked at Victoria Hall, a 111-year-old his- torical landmark.

The Mayor and others in the town are determined to restore the old Hall to the grandeur of pre-Confederation days when the Prince of Wales waltzed in the Great Ballroom during opening ceremonies in 1860. Total cost of the building's construction was $110,000.00. Renovations, will cost more than fifteen times as much.

Four months ago a group of citizens formed The Society for the Restoration of Victoria Hall to raise money and to supervise renovations. John Taylor, curator of the Cobourg Art Gallery and executive director of the society, said after walking through the grand old building, “I couldn’t believe it at first, the old Opera House, the courtroom patterned after the Old Bailey, the rotunda, just everything about this place cried out for restoration.”

One of Mr. Taylor’s first acts was to submit an application to the department of manpower and immigration for a grant under its Local Initiatives Program to begin minor renovations and help start planning for the larger workloads to come.

Our society, with a grant of $19,000.00, has engaged an architect to plan the renovation, and a six-man construction crew to rip out the interior of the Opera House and do other minor work.

"We would have liked to start on the major projects this win- ter, but decided to tear out seats and the stage before renovating any further", said Mr. Taylor. “Were only going to remove things that were not part of the original ..building."

The construction crew said they hope funds will be made available to keep renovations going beyond the end of the Local Initiatives Project -- a thought shared by everyone else connected with the project. Mayor Heenan explained: "If we hope to keep this country to- gether we must stop tearing down our history, These grand old buildings are part of, our history, and once they are gone. that part of our history goes with them." Mr. Taylor, though not a native of Cobourg, holds a special kind of respect and love for the hall. "This build- ing is a piece of the best Vic- torian architecture around", he said. "It contains a theatre. courtroom, municipal offices, office space and is the only meet- ing place in town that will hold more than 300 people. It's irre- placeable."

One of the biggest surprises in Victoria Hall is found behind a huge set of doors on the main floor. The large room is prob- ably as close to the old Bailey as any will ever get. The court- room, which is still used as a provincial judges' court; is pa- terned after the famous London courtroom even to the seats made of a special kind of leather to match those of the old Bailey. Behind the judge's bench is a mural, approximately 40 by 15 feet, of the British Coat of Arms Representatives of the Ontario Art Gallery told Cobourg council If they ever tore down Vic- toria Hall they wanted that mur- al even if it meant moving the whole wall to Toronto.

The federal grant has allowed us to make a beginning", said Mr. Taylor as he looked "over a chart that showed five years of hard work in fund-raising. But he initial success of the project is helping generate widespread interest in Victoria Hall.

The artist’s sketch illustrates Cobourg’s historic Victoria Hall as it was 100 years ago and will look like again in four years when renovations are completed An architect and six workmen have been hired by the Society for the Restoration of Victoria Hall to begin renovations. The Society began its preliminary work after receiving assistance from the Federal Government’s Local Initiatives Program.
Media Type
Text
Item Type
Clippings
Description
Whole Character Of Cobourg Wrapped Up In Victoria Hall
Source: The Peterborough Examiner, Monday, March 12, 1972
Acquired: January 2008 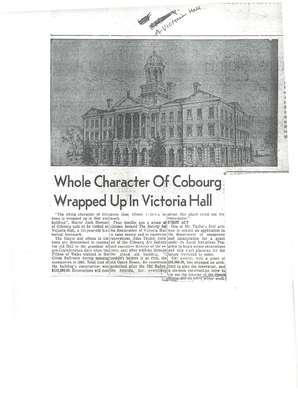