Mr. Erskine was born and grew up just across the railroad tracks from the railroad stations in Cobourg. Some of his earliest memories are of the last days of the Cobourg and Peterborough Railroad and the Grand Trunk railroad.

By the late 1890's the railroad to Harwood was not much of a going concern. Much of the line lay unused. Mr. Erskine recalled trains of the Grand Trunk still running up the line as far as the Baltimore crossing. These trains, consisting generally of two small engines and about 20 hopper cars, would then pick up a load of gravel from the quarries near where the old line crossed the Dale Road, the “Baltimore Crossing". It required hundreds of workmen using pick shovel and wheelbarrow to load the cars. When full the train would leave for the site of construction along the railway line. In order to unload gravel one side of the car was removed and a drag drawn by a winch on the engine forced the gravel out.

Mr. Erskine could also recall the construction of the first Division St. subway, before the first World war. Because a the vast amount of hand labour required about four hundred immigrant workmen, mostly Italian were brought in by the railway. In order to accommodate them, a row of dormitory box cars was left on a long siding between Division and D’Arcy St. At this time hand labour was still required but with the additional use of wheel scrapers. This was a horse-drawn device something like a giant plow only instead of digging a furrow it scraped up a hole. It was up to the man behind to force the machine into the ground, a rather exhausting task.

The construction costs must have been paid up by the passengers using the train. Before the advent of the automobile and smooth roads {not necessarily at the same time) the railway was the only convenient way of going a long distance in relative comfort. Smoke was a passenger hazard with the small engines puffing clouds of black smoke. No wonder they were nicknamed "teapots". It became a habit of townspeople on Sunday when they weren't working to walk up George St. to the station to meet the trains which came in about every hour. Mr. Erskine tells of the schedule.

For those trains which arrived during meal times, there would be a twenty minute stopover in Cobourg. Dinner or supper would be served in the big dining room in the Grand Trunk station. This room also had a bar which on Sunday could serve only soft drinks.

Besides the waitresses and cooks, the station employed an operator, two baggagemen, who operated a baggage check twenty four hours a day, and four car inspectors. These men, working twelve hour shifts would walk up the length of each train tapping the wheels, checking for cracks. Every train; passenger or freight, had to be inspected. All trains at this time did stop in Cobourg which was one of the main stations on the Grand Trunk line.

In his childhood Mr. Erskine spent many afternoons at the lake swimming and playing and watching the boats come into the harbour. One of the highlights was watching Capt. Dan Rooney bring his schooner into the harbour with a load of coal from Oswego. They would watch him tie up on the inside of the east pier and unload the coal up to 600 tons of it into two-wheeled horse-drawn carts. The coal would then be hauled away to one of several distributers: Plunkett, who worked with Capt. Dan Rooney, Duncan or Brown. Plunkett, besides getting coal from Capt. Rooney and the Charlie Marshall also operated a steam barge for hauling anthracite from Oswego. This vessel was called The City of New York. Several vessels including these two would lay up in the harbour over winter.

Mr. Erskine can also remember the sinking of the Jessie Drummond on the 2nd of December in 1902 with a full load of hard coal for George Plunkett. By the next spring this coal had washed up on the beach between Division St. and the Breakers Motel. Most of the inhabitants of Corktown, the poorer section of Cobourg, south of Queen St. went rushing down to the shore with wheelbarrows, soap boxes and even baby carriages scraping up as much coal as possible. Within a few days the beach was perfectly clear of coal again. One man, who was on the beach at this time claimed to have gathered 5 tons of this coal. Many people had enough to last them through the next winter.

For a period in the early 1920's Mr. Erskine did summer work for one of the car ferries running between Cobourg and Rochester. Besides carrying passengers it would bring a train of coal cars across which would then be put onto the Grand Trunk tracks and run up through town to the various industries. When Mr. Erskine was employed on the ferry he was glad to get a job as jobs were very scarce. The wages at that time were $90 a month, which was quite good. This involved working for six hours and having six hours off. Mr. Erskine worked as a stoker, shoveling coal into one of the four Scotch Marine boilers which powered the car ferry. 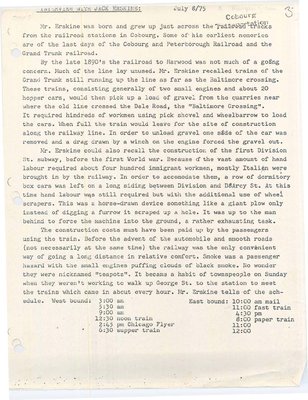