Soldier, educator, historian and sportsman, Colonel King has played a vital part in Cobourg's development and has a long and active association with the Library.

Born in Uxbridge, Ontario, in 1911, Colonel King graduated from Victoria College, University of Toronto, with the Regents' Gold Medal in Latin and Greek, and gained his teaching certificate at the Ontario College of Education. In 1935 he joined the staff of Cobourg Collegiate Institute (now Cobourg District Collegiate Institute West), and was appointed Principal when CCI became CDCI in 1953. During his years of teaching at CDCI West, he taught Latin, ancient history, English, guidance and coached a few rugby teams. After CDCI East opened in 1960, he supervised both schools for several years and retired in 1972 after thirty-seven years service.

Colonel King became involved with Cobourg Library when it operated as an Association Library. Colonel King was Chairman of the Board for several years when the library became a public library and moved to its former home on Chapel Street. He still maintains a lively interest in the library.

Colonel King has had a long and distinguished military career. As a Captain with the Cobourg 22nd Medium Battery, he led as a troop commander in the Second World War, was promoted to Major and commanded troops in North West Europe. In 1946, he was promoted to Lieutenant Colonel and became Commanding Officer of the 33rd Medium Regiment in Cobourg. For over half a century, Colonel King has been an active member of Branch 133 of the Royal Canadian Legion.

A long-time member of the congregation of St. Andrew's Presbyterian Church in Cobourg, Colonel King was an elder for thirty-seven years. He is associated with many of Cobourg's service clubs, including Rotary, and has been awarded many honours for his cultural, sporting and charitable endeavours. 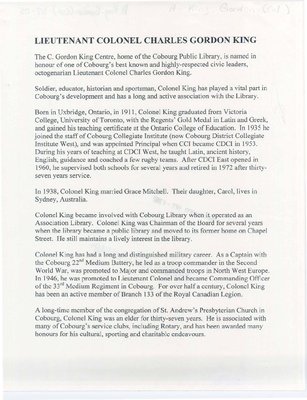