Well-known citizen of Cobourg Col. Gordon King will retire from the principalship of CDCI West in June, the end of this school year.

Col. King was born in Uxbridge, Ontario and attended public school and high school there. He went on to Victoria College at the University of Toronto takings an honor course in Latin and Greek. He graduated with the gold medal for his studies in his final year.

From university, Mr. King enrolled at the Ontario College of Education, and graduated in the year 1935-36.

"Jobs were scarce in those days," he said, “so when there was an opportunity to come to Cobourg, I took it."

"I joined the militia, the 22nd Medium Battery, my first year in ,town,” said Col. King, "'and when it was mobilized in July 1940, I left the school and was with the army for six years and one week overseas.”

Mr. King became battery commander and a major during his service overseas and stayed on with the occupational forces after the war had ended. He returned to Cobourg in February 1946 and became CO of the 33rd Medium Regiment of Cobourg.

In 1953, he became principal of Cobourg District Collegiate. There was just the one high school at that time.

"I've seen five additions and the building of a new school since I've been here," said Col. King who supervised both the East and West Collegiates for three years from 1960-63.

The Colonel has noticed, as a major change in the educational system, "the change from quite a rigid system of courses to now a much greater permissiveness in the choice and content of them.”

I don’t know if it’s getting better,” he said, “but it’s getting broader. When I first came here there was a good percentage of Grade 8’s who never came to secondary school. Now there is far more opportunity for people to get a secondary education.”

Pupil-wise, I don’t see much of a difference between students today and then. But, I do notice a difference in dress.”

Col. King pointed out he students of the 30’s; the boys in ties and collars; the girls in skirts and sweaters.

“Now there is a great variety,” he said. “That might be an interesting topic of research; whether the sloppiness of dress has anything to do with the degree of achievement. But, I’m not the one who’s going to do that.”

The Col. is now looking forward to another cruise, this time in the Baltic, in the latter part of the summer with his wife.

I enjoy curling, but I haven’t had the time for it during the last few years. I hope to be able to do it when I get my feet free from under the desk.”

The Col. also enjoys reading and has been very active in community life. At present, he is engaged in writing a history of Cobourg’s 50-year-old Rotary Club. He is always on the lookout for information which contributes to the history of the collegiate.

He sat on the arena board for over 5 years, served on the library board for 13 years and was clerk of session at St. Andrew’s Church until last year. He is now roll clerk for the parish.

Col. King is an active member of the Canadian Legion and permanent secretary of the 47th Battery Benevolent Association. He was secretary-treasurer of Quinte Region Headmasters Association.

Col. King married Grace Mitchell of Cobourg and they have a daughter, Carol, who has been in Sydney, Australia as a nurse for the last four years. She was home for Christmas this year.

Asked what his plans for the future are, Col. King joked, “I suppose I’ll be at my wife’s command pretty well.” 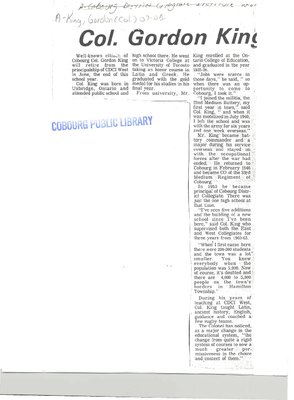