Thomas Ball arrived in Cobourg in 1845 from Witanhundish, Gloucestershire, England, where he was born in February 1816. He built the home at 329 Ball Street in 1878 and lived there for many years. There was no relationship between Thomas Ball and Joseph Ball who operated the carpenter shop on the N.W. corner of King Street and Ball Street and after whom the street was named.

Thomas F. Ball was an honest old leather merchant and shoe- maker who resided in Cobourg for nearly half a century. He was one of Cobourg’s most highly respected citizens. A resident of Cobourg for 48 years, he died in August, 1893, and is buried in St. Peter’s Cemetery.

Mrs. Alex Pratt of Pratt’s Mill in Cobourg was his niece. His brother Mr. William Ball, owned and operated Ball’s Mill in Baltimore and many of his descendents are still well known and active in the area.

A leather merchant for more than 30 years, Thomas Ball was a good friend to the poor. In business dealing he was scrupulously honest and his word was as good as his bond. 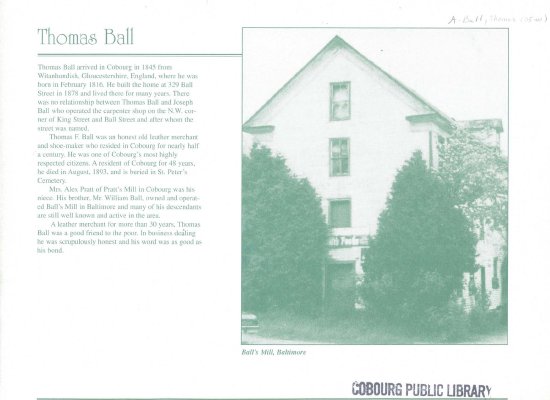