The wheels were to enable it being moved from one site to another without having to be strictly carried as its weight was prohibitive. This was an evolution on the larger original "dragsaws".

The exhaust would pass between the two wheels and this saw had a carburetor in front with a magneto behind. This was a two cylinder and was kickstarted, the motor was probably a 103cc 4 stroke engine.

It was started from the ground and then wheeled into position. The operator would flip the lever and kickstart it much like a motorcycle, the bar would turn for ease of operation.

This saw was used to cut through a tree after it had been notched, prior to this cross cut saws were used for the same operation.

The chain on this saw had to be filed, set, cleaned and sharpened separately, definitely a tedious task. It was called a scratcher chain. 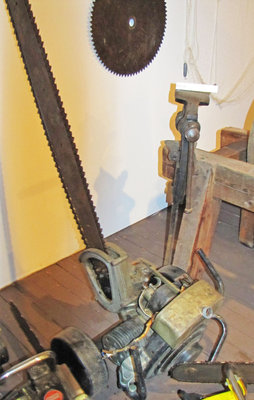