This is a wood and metal winching tugboat model called an Alligator. The name “alligator” comes from the fact that these warping tug boats could maneuver over land as well as water, an invention to revolutionize the logging industry around the turn of the 20th century.

The creator, Joseph Sarazin of Blind River Ontario Canada worked in the logging and lumber industry and was an early donor to the collection of Timber Village Museum in Blind River, Ontario, the first logging museum in Canada.

This is a model of a West & Peachey steam warping tug as was used in the Blind River area. "The Bay City", TS #92, was shipped to Eddy Bros. & Co., Blind River, Ontario in 1909. Later owners were Hope Lumber Co., Thessalon, Ontario and Carpenter Hixon Co. Ltd. Blind River, Ontario by May 1929. The John McLean was owned by McFadden and Malloy about 1919.

Notes
Called alligator because they had the ability to crawl or winch themselves across land from one body of water to another.

The boat was a flat-bottomed scow (warping tug) made of three-inch by six inch white pine planks and driven by two paddlewheels. The power came from a simple, upright, single-cylinder wood burning steam engine. A clutch allowed the power to be shifted from the paddlewheels to a winch, which could warp a cable like the rope on a cadge crib. (Prior to this invention, booms of logs were rafted from one place to another, powered by horses and a capstain, a slow and tedious process). Two heavy oak rudders, capped with steel, were added to the bottom of the boat so it could be pulled onto and over land when the cable was attached ahead and wound up.

The engine could be thrown in gear to drive the paddle wheels or to drive a cable drum which held a full mile of five-eighths inch cast steel wire cable. ……The boat was sufficiently powerful to move a bag boom containing 60,000 logs when there is no wind to interfere or 30,000 against a head wind. The engine was 12 hp.

It is noteworthy that the invention of the Alligator was generally credited with having been the forerunner of the numerous amphibious military vehicles which were used so freely in the Second World War. 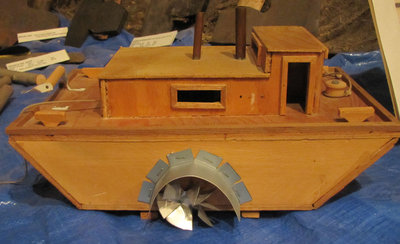