BLIND RIVER - A life-long resident of town is dead.

Eugene Leboeuf died suddenly Friday, at the age of 65

The news came as a shock to the many people who knew Mr. Leboeuf, including his life-long friend Herbie Albert. Albert says he was shocked when he heard about the death of his friend.

The two started their friendship as young boys growing up in town.

"We did everything together, fish, hunt, swim, camp. We helped each other build our camps. He'd help me, I'd help him."

Mr. Leboeuf also served his community as a councillor for 28 years. In 1955 he was elected to town council, a position he held until 1978.

Ten years later he re-entered the municipal political ring and served his community once again as a councillor for another five years.

"He was a good councillor," says Del McCoy, who also served as a town council at the time.

"He spoke his mind, and he made sense when he did."

She also knew Mr. Leboeuf all her life.

"He was a real nice person and he would always listen to you."

When he owned the Leboeuf Meat Market he would take time to talk to his customers.

"All and all he was one good person."

Mr. Leboeuf also work hard for his church and served as a member of the Knights of Columbus.

"He's really going to be missed. He was an outgoing person."

He also served on the planning board and numerous committees that comes with the council job.

"He was a hard worker and always took his council job very seriously," Corbiere says.

Interment was at Hillside Cemetery.

Media Type
Text
Genealogical Resource
Item Type
Clippings
Description
This article concerns the sudden death of a community elder, Mr. Eugene Lebouef. The article share information about Mr. Lebouef's life, his work as the owner of a meat market, and his community involvement in both politics, church and the Knights of Columbus. 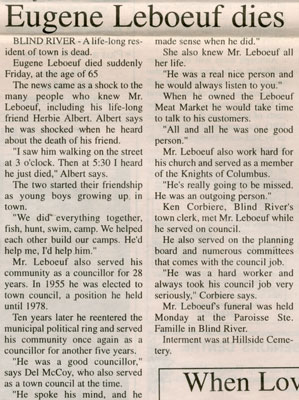