Media Type
Text
Image
Item Type
Documents
Description
This large format photocopie article shares information about the changes on the sleepy town of Blind River, Ontario after the discovery by Franc Joubin, of the richest uranium find in the world. The article has 18 photos including one of Mr. Joubin in his prospector's gear chipping off a piece of rock, Blind River train station, people boating on area lakes, mine staff and sites, landscapes and Joseph Hirshhorn's home.

Notes
This article shares that while Blind River could be a tough town, it also had a fully equipped brokerage office.

GEOLOGIST-PROSPECTOR JOUBIN, THE MAN WHO FOUND BLIND RIVER, CHIPS OFF A PIECE OF RADIOACTIVE ROCK FOR ASSAY

He was a mild-mannered, scholarly man who could often be seen, in Canada and other parts of the world, just as he is pictured above—wearing Geiger earphones and chipping away at some old rock with a prospector's pick. Franc Joubin became convinced that the lake-laced bush surrounding the Ontario hamlet of Blind River, a seasonal lumbering town, was just bursting with uranium. It seemed a preposterous theory- no one had ever found uranium ore in the kind of mineral-bearing formation that existed there. But Joubin persisted and when it was finally staked out, a little over two years ago, the strike turned out to be far richer than even he imagined. Now, after an unprec-edentedly rapid development period, and with only a fraction of the encircling bush explored, Blind River is the frenetic capital of what seems sure to prove the world's richest—$3 billion—uranium field.

This September the first of the four gargantuan mines already assured in Blind River will go into operation. They will range up to 5,000 tons daily production capacity (The largest uranium mine in the U.S. produces 1,000 tons daily.). Even more important, the ore reserves of the Blind River mines arc staggering in size. One mine alone has indicated reserves in excess of 75 million tons as compared to 5 million tons reserve in the largest U.S. mine. By 1957 Canada, due largely to the Blind River field, will possibly be the world's largest producer of uranium. No field in history ever sold so much ore as Blind River before taking an ounce out of the ground. But the most significant meaning of Blind River is the fact that the Western world is now assured a supply of uranium for as far ahead as man can see.

Today the once slumbering town of Blind River has changed as if touched by a wand and hit by a steamroller. Trains pulling into the tiny station disgorge mining people from all over the world. The same people have taken over the once lonely lakes, where they swim, cruise and water-ski almost in the shadows of the rising mine headframes. The town throbs with a Klondike fever, and the primeval bush around it is being trampled out of recognition. What happened to Blind River is described on these pages. There follows (p.85) the story by Life's William Brinkley of why and how it happened—the stubborn quest of Franc Joubin whose missionary belief and fanatic persistence brought about the phenomenon of Blind River. 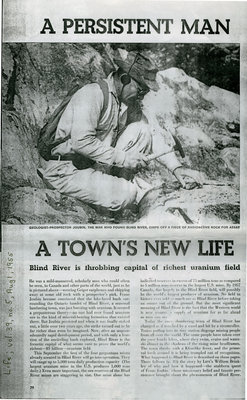