BLIND RIVER — Sixteen-year-old Courtney Olmstead believes that he and his horse, William Tell, are on the fast track to Sydney.

Olmstead, a Grade 11 student at W.C. Eaket Secondary School in Blind River, figures his long term goal of being on the Canadian Equestrian Three Day Event team for the Sydney 2000 Olympics is a realistic one.

But he will need more than his own dedication and the help of his family to go all out for gold in this "sport of kings."

The belief of Courtney's coaches in his talent has motivated his parents, Jane and Richard to support Courtney's quest to the full extent of their financial capabilities. His grandparents, Ivy and Joe Laffrenier have also opened their pocketbooks for the cause.

Jane is a teacher's aide with the North Shore Separate School Board, Richard is a maintenance pipe fitter at Cameco Corporation in Blind River. So far, they estimate that they have about $25,000 invested in their son's dream. And it has hardly yet begun.

So a support team led by Courtney's parents and including his 18-year-old brother Jeff has been organized.

On the team are Ted Phillips, Bud and Marion Albert, Alan Campbell and Bob Villeneuve. They have put together a fund-raising package which is being presented to businesses and service groups in the area. A letter has also been mailed out to several hundred individuals.

"There are a lot of people helping put things together," Jane says, "But we need a lot more to make it happen."

The Blind River Chamber of Commerce donated a booth at the Home and Sports Show that is to be held this weekend, Apr. 25-27 at the Blind River Community Centre. Courtney will be there with a video, photographs and some of his equipment in the hopes of reining in more support for his ambitious endeavor.

One obstacle to be overcome is a local lack of knowledge of and appreciation for the sport Courtney has embraced.

Three Day Events (also known as Combined Training Competition), are held over a three day period and are a grueling test of horse and rider in three areas of expertise.

On day one, there is a dressage test. Refined, controlled and dignified, it puts the pair through a designated pattern of intricate and difficult manoeuvres within an enclosed area on flat ground. No jumping is involved.

Then on day two it's the cross country endurance portion of the contest where horse and rider tear across several miles of varied terrain negotiating a dozen or more natural obstacles including fences, ditches, hedges and combinations thereof, along the way.

On day three, after a rigorous vet check, the horses are asked to negotiate a course of "stadium jumps" in an enclosed arena as a further test of their stamina and skill.

"It is the speed, the way the jumps are made — always different. It's the excitement. You go so fast and over so many different jumps," Courtney says attempting to explain what draws him to this dare devil sport.

Courtney's mount, William Tell is a 12-year-old English thoroughbred. His parents purchased the horse last year on the advice of his coaches. Although he already had a horse, it's potential didn't measure up to Courtney's, the coaches said. For Courtney to advance

he had to upgrade.

Jane says, "They set him up on the absolute best horse that they could (within our budget). We just can't say enough good things about the coaches.

The coaches are Wolfgang, Beverley and Robert Schinke of Horse People Inc. near Ottawa, a family with decades of experience at training horse/rider combinations for three day eventing right up to the top levels of competition.

Last year, Courtney's first competing in the Three Day Event, he surpassed expectations by climbing through the first two levels of competition and qualifying to compete at the junior preliminary level, something that takes many riders several seasons to do.

And already the teen is perched on the first rung of the recognition ladder by being designated as a Young Rider. This season he will concentrate on attending a series of five shows culminating in August with the Young Riders' International Championship in Chicago.

Canada's top coaches, including Peter Gray and Sue Ockendon, will be at the Chicago show scouting out young talent. Courtney hopes to catch their eye.

To be an Olympic contender in three short years, will require a meteoric rise through the intermediate level in 1998 and into advanced competition in 1999 when it is his goal to compete at the Pan American games.

But, Jane and her son insist that it is possible given Courtney's auspicious beginnings and his coaches' claim that he has what it takes. According to them, "Should he continue at his present level of commitment and improvement, he should have no problem meeting his long term goals."

Just back from his first competition of this season and his first exposure to an international event in Lexington, Kentucky, the young man is pumped by an impressive fourth place finish.

Perhaps most surprising in Courtney's story is the fact that this young equestrian has only a four year long interest in horses.

Courtney got his start taking lessons from Pat Astles at Potomac Stables near Blind River in 1993 when he was 12.

By 1995, after a few local shows, he found that jumping was what he wanted to pursue.

So, while the other guys were heading to hockey camps in the summer, Courtney sought out a horse camp that would immerse him in the world he dreamt of joining. Astles recommended the Schinkes.

One thing led to another until now he and William Tell divide their time between Blind River and Ottawa. When in Blind River, he travels to the Sault once a week for a jumping session with Tina Breed, head coach at Strathclair Farms.

Between keeping up his school work in spite of missing several weeks of classes for pre-show training, travelling back and forth to Ottawa and distant shows, and maintaining a disciplined

When he is in Ottawa, Courtney is responsible for his horse's care and in winter William Tell is transferred to the Blind River area so that Courtney can look after him and continue his riding regimen in the off season.

The many hours he and his horse spend together help nurture the trusting relationship that is necessary for the partnership's success.

Courtney will have to keep himself and William Tell in top form to realize his dream for the year 2000.

But, according to his mom, "he's a pretty cool cucumber" and "he is very dedicated," both essential attributes for an aspiring Olympic athlete.

COURTNEY and his mount William Tell at Kentucky competition 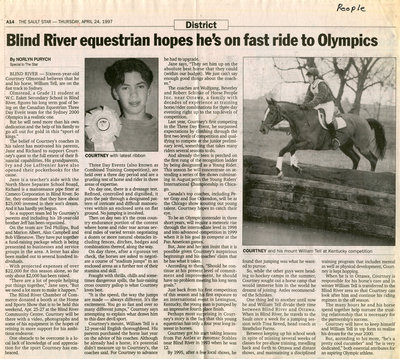