Creator
Fred Bodsworth, Author
Media Type
Text
Item Type
Documents
Description
This photocopy of the original four page Harper's magazine article tells the story of the uranium boom and bust in the Blind River and Elliot Lake area. The story shares information about the social and economic impacts and costs on the two areas that were not anticipated during the planning for the new model town in the wilderness - Elliot Lake.

A backwoods sawmill town is recuperating—from a uranium boom, and an influx of starry-eyed social planners and hell-raising miners.

THROUGH two hundred miles of rock-ribbed forest in Ontario, Highway 17 winds westward from Sudbury—a nickel-mining city — to the canal town, Sault Ste. Marie. Halfway between, on the island-studded northern shore of Lake Huron, is a little sawmill town—Blind River. For many years it was the major settlement in this expanse of wilderness but few Canadians were aware of its existence save for a handful of sportsmen attracted by the excellent trout fishing and deer hunting.

With no such athletic incentive, I stopped off there a short time ago. I was curious about how this long-somnolent outpost was doing in the wake of a recent bout of progress in the form of sudden industrialization and sophisticated social planning.

The twentieth century roared into Blind River less than a decade ago. Until then its 2,500 inhabitants had stagnated—not too unhappily—in a threadbare frontier society. There was only one major employer, the McFadden Lumber Mill, which drew pine logs from the forest that stretches five hundred miles north to Hudson Bay. In winter, when the mill was shut, men found jobs inland in lumber camps—most of them, it was said, had been here so long they couldn't work without the smell of sawdust in their nostrils.

During the depression, the mill closed down for several years, tax collections dwindled, and town went bankrupt. In 1935 the Province's Department of Municipal Affairs stepped in and placed the town's affairs under a kind of government receivership, which continued even after the mill reopened. The chamber of commerce tried to attract other industries—but without success. So Main Street deteriorated to a drab facade of unpainted store fronts and many homes were sagging, tar-paper-covered shacks. To the visitor in those days, the place looked bleak; but one could live reasonably well on a low wage.

Then—during the spring of 1953—high-booted, tight-lipped strangers began to fill up the town's four hotels. Clothing merchants did a booming business in sleeping bags and bush clothes. Planes came and went mysteriously, landing on the river, loading up supplies, then disappearing northward. The strangers answered queries with shrugs and vague comments about going fishing. But by summer the secret was out. These were prospectors, diamond drillers, and promoters. A large deposit of uranium—glamour ore of the dawning atomic age—had been found nearby and more than a thousand claims had been secretly staked.

A year later, diamond drilling and Geiger counters had revealed not one but several rich ore bodies. Eight hundred, square miles of virgin forest were dotted with camps; grouse and wolves fled the menacing rumble of air compressors and bulldozers. Soon head-frames rose over future mine sites and a road was slashed through thirty miles of precipices and quaking swampland.

In Blind River, merchants spruced up their faded store fronts and home owners feverishly remodeled dwellings to meet the brisk demand for rooms and apartments. Rumor had it that the town must prepare for a tenfold increase in population; a New York magnate was said to be negotiating the purchase of four hundred building lots in Blind River for new miners' homes. Clearly, a boom was on the way. This was indeed the case; but the shape and nature of the boom proved, in many ways, surprising.

The principal mines, it turned out, would be thirty or forty miles from Blind River—a considerable commuting distance. In addition, mining company and government planners who looked over this rude little hamlet decided that it could not possibly absorb the anticipated population growth. To ensure a stable labor force and sustained production, an entirely new community must be built.

To social scientists the prospect was exhilarat- 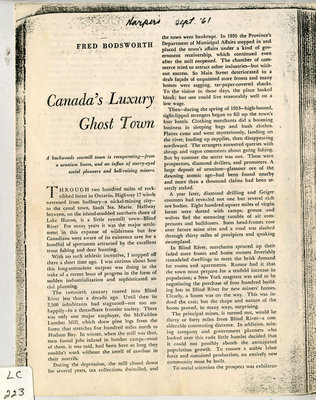