A meeting Monday night between Eldorado Nuclear Ltd., the Atomic Energy Control Board (AECB), Lummus of Canada and other regulatory agencies failed to produce some of the controversy characteristic of such meetings.

More than 220 persons, largely from Blind River and area and largely pro-refinery, listened to a parade of speakers talk about the refinery and their function in relation to it.

Joe Didyck, from the AECB, said the board was a sort of "nuclear policemen" who "lay out the rules of the game" early to companies such as Eldorado.

"Basically, the control board has a mandate to concern itself with the health and safety of the general public and the workers at a nuclear facility" as well as the security of the refinery and its environmental impact.

For the Blind River uranium trioxide refinery, Eldorado must receive three approvals from the board before it can begin operations - site approval (already given in February), construction approval (under review) and operating (to be reviewed later).

And when the refinery is built and in operation, AECB continues to monitor the situation "so licensee never gets off the hook."

AECB is part of an inter-agency review committee, which includes regulatory agencies from both the provincial and federal levels from which it receives advice.

Didyck explained that he is part of a support staff that reports to a five-member board that actually makes up the AECB.

Paul DiGivanni, Lummus of Canada's manager of the Blind River refinery construction, said an all out effort will be made in the summer to finish the outside shell of the process building of the refinery by the fall so work car. continue in the winter months.

He expects this work to be done on time and as a result, the refinery should be completed and operational by May. 1983.

The process building is the largest of three on the site and is more than 110,000 square feet in size with four floors in some parts.

Lummus. which has a great deal of experience in building nuclear facilities, will employ 360 workers at peak .

At present, there are 119 workers on the refinery, including 19 non-union administrative, clerical types, "one or two engineers," nine Lummus union workers and 20 unionized contract workers, among others.

Lummus' needs are met locally "where possible" and he noted many local businesses have had business with the company.

Bill Stinson, Eldorado's Blind River plant manager, stated that 200 jobs will be created by the refinery. Between 100 to 125 of those jobs will go to local people. 35-40 will be brought in from Port Hope for their expertise and the rest will come from other Eldorado operations in Canada.

Lab technicians, tradespeople, operators and clerical personnel will be required for the refinery. Many of the employees will need high school and-or community college educations, plus an "extensive" training program from Eldorado in order to be hired for the refinery, said Stinson.

That waste will be transported to Elliot Lake in slurry form and dumped on the tailing piles for recycling under the raffinate program. The waste will represent a small portion of the waste already produced at the Elliot Lake mines, Stinson said.

Other representatives from Environment Canada. Health and Welfare Canada, ministries of the environment. natural resources, and labor also spoke, outlining their role with respect to the refinery.

Media Type
Text
Item Type
Clippings
Description
A meeting was held in Blind River for the public attended by Eldorado Nuclear, the AECB, Lummus of Canada, Environment Canada, and Health and Welfare Canada on May 10, 1981 to address jobs, waste disposal and other issues. 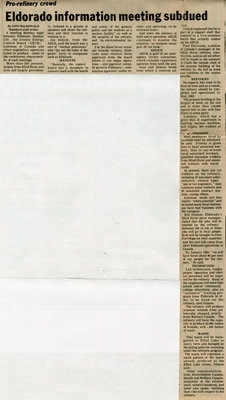