Before junior A', Blind River Players Honed Skills In Junior B'

Before the Blind River Beavers became a junior A' squad they were a junior 'B' team.

The junior 'B' Beaver team lasted from 1970 to the mid-1980s, and its first coach was George Albert.

It was a rough time in Blind River then. The town lost its major employer in 1969, but there were still a lot of players playing midget hockey. The crowds, however. were looking for another level of play.

This was also the time Canadian hockey was reeling from two major upsets. The World Hockey Association was formed, outbidding NHL teams for several star players and the best Canada had to offer beat the best Russia had to offer in the then-Soviet Union.

Hockey was king in the early 1970s and even-weekend people crammed the stands at the long-closed Blind River Memorial Arena to cheer on their favorite players.

In the beginning, fan support was consistent. "Every Saturday night, the fan support is really good," says Albert. "People in Blind River really liked hockey. "But it was a little less in the 1980s."

To play with a higher calibre of talent, the Beavers were created and joined the International Junior 'B League in 1970.

In the beginning, there was no joy in Beaver town. Times were tough.

against seasoned junior B teams, who had been in the league since the late 1960's.

When the team formed, however, they were also short two goalies, so the team dug around in Sault Ste. Marie to find them.

Albert remembers those days well. The 77 year-old former high school teacher lias been involved with hockey for 55 years and he coached hockey for 35 years.

Albert trained the Blind River team for two years before deciding he would coach midget hockey.

When he went back to training the Beavers, the coach had even more stuff to show the young puck handlers.

"My approach was different, I learned all the physical skills, how to teach them and how to find the errors.

"My coaching was much better then."

Some of the best Beaver players he worked with were Jerry Summers and Dave Rainville.

Conditioning was a big thing the Beavers benefited from.

"That's what we had. (But) we didn't win a championship."

That would come later, with the introduction of players from outside of the community.

Rainville played forward and centre position on the Beaver team from 1971 to 1973.

Hockey was different then.

Many helmets had no face protection, the players were older and two-line passes were not permitted. The latter was changed to make the game faster.

When the call went out for volunteers Rainville remembers about 30 to 40 eligible players showed up for tryouts.

Those that made it were put through the paces by Albert, who Rainville describes as a great coach and an excellent physical trainer.

Despite the workouts the untried team did not do well.

"We were not very good. We were in last place in the first year," says Rainville.

Most of the boys were local 17 to 19-year-olds, with at least three American players. Don Craven, Steve Wagner and Paul Malette, from Sauk Ste. Marie, Michigan. These boys were happy to commute to Blind River, says Rainville.

Their own teams kept them on the bench too long, but they wanted ice time, so it was off to play for the lumber town. However, there was still

the problem of playing against established junior 'B' teams.

That began to slowly change as the Beavers improved.

In 1974, Vic Labbe became the second coach, but the team would still not win the top spot until it began massively importing players in the 1980s.

Former Beaver Shane Boyer was a defenceman in the late 1980s and was only 16 years old at the time. Players were becoming younger and faster than their 1970s counterparts.

"One year, they imported a lot of players. Hardly any from Blind River," says Albert.

The executives behind the team invited as many of the best players as they could from other communities and the Beavers won the championship in the junior B division.

they got a good team," Like Albert, Rainville does not play hockey anymore, although he still watches the games.

To stay on the ice the 52-year-old now plays curling.

Boyer remembers stories of the coaches like Albert, Vic Labbe, Jem-Jensen and Don Lafontaine. Each one brought something different to the Beavers game.

Boyer says Labbe was a disciplinarian while Lafontaine was excitable, especially during game-time and especially in defense of his players after a 'bad call".

All these men added something to the team's legacy.

Boyer says hockey was better when he was playing. The players were older and hence more mature.

Boyer is now an assistant coach working with 12-year-olds on a pee wee team.

Creator
Shannon Quesne, Author
Media Type
Text
Image
Item Type
Clippings
Description
This article discusses the change of the local hockey division from Junior B to Junior A and how the sport has changed from the early 70's. 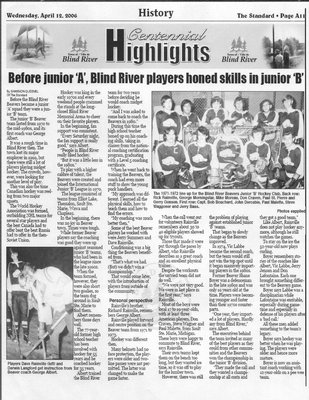