Creator
William Brinkley, Author
Media Type
Text
Image
Item Type
Documents
Description
This is a photocopy of a story from Life Magazine that concerns Frank Joubin's fanatic persistence in finding uranium. The article provides information about Joubin from his early interest in geology, his ongoing research and world-wide exploration through to his success in the finds in the Blind River area and life thereafter. Four pictures accompany this article.
Notes
The relationships with promoter Joe Hirschhorn and William Bouck were key to staking the large claim. Joubin reportedly remained a humble man despite earning millions from his claims as he indicated he was more interested in seeing uranium put to positive use for mankind than he was in displaying his wealth.

If there is one man in the world who, by any standard of historical justice, should have found the great Blind River uranium field [pp. 78-83), it is the man who did. No living person has searched more zealously for uranium than Franc Renault Joubin. A 13-year-old geologist, Joubin became uranium-minded hack in 1933, when he got excited by the cancer-curing potentialities of radium.

He made up his mind to hunt for radium's source metal. After college training in chemistry and geology, he set forth on a 16-year search that took him from the Arctic to the Amazon, frequently looking for other metals for a living but always on the watch for uranium. Even after he finally discovered it at Blind River he spent three frustrating years dangling it under the noses of numerous major mining explorations companies in North America. Without exception they refused to believe in Blind River uranium and turned him down.

In spite of his dedication, persistence and expert knowledge Joubin would never have found Blind River at all except for the accidental fact that one evening in May 1949 he happened to he sitting in a tent in the bush north of Sault Ste. Marie, Ontario, and 70 miles west of Blind River His far-ranging search for uranium had taken him there because pitchblende had been discovered nearby, and all experts agreed that any major uranium strike would have to he made in pitch blende. That day he had come in from long, unrewarding hours of prospecting, lie was sweaty and tired and he had just started to pull off his boots when he heard a rustle at the flap of his tent. He looked up to see a strange man standing there.

He was a German immigrant prospector named Karl Gunterman. He had come to the tent because he, like everyone else in Canadian mining, knew that Franc Joubin was "crazy" on the subject of uranium—he was a man who even wore his Geiger earphones while driving his car. Gunterman and his partner, a Sault Ste. Marie hotel owner by the name of Aime Breton, thought that Joubin, better than anyone else, could help them evaluate and develop a uranium find.

"Gunterman told me," Joubin remembers, "that he and Breton knew where there was a specimen of radioactive rock."

They had picked the right man. Joubin listened intently, then began firing questions. But all his questions evoked reluctant or mysterious answers. Gunterman had good reason to be mysterious: he himself did not know where the radioactive rock had come from. The discovery itself was wrapped in mystery.

As Joubin learned much later, Breton had simply wandered over to the mining recorder's office near his hotel in Sault Ste. Marie one day idly passing his Geiger counter over the recorder's collection of rocks, he was startled when it began to buzz. Moving the counter closer, he narrowed the kick down to a lone rock no larger than his fist and caked with dirt and grime. Turning it over, Breton was just able to make out a single smudged word on a piece of paper beneath. The word was "Long."

Gunterman told Joubin none of this at their first meeting in his tent. He only promised to get in touch with Joubin when they found out something more definite. When Gunterman had gone Joubin sat alone, baffled and enormously excited. A day or two after that he began to badger Breton. He went into Sault Ste. Marie and hunted up Breton at his hotel.

"You found out yet where the rock came from?" he asked.

Nope, not yet," the hotel man said. "But we're looking."Every time he came to town Joubin would drop by the hotel, ask the same question and get the same answer.

After years of prospecting, Joubin had reached an utterly frustrating point He knew now that there might be a radioactive field nearby, but he had no idea where it was. He had not even seen the rock that supposedly came from the supposedly radioactive field. He could only wait and he had already spent almost his entire life looking, and waiting, for a chance like this. 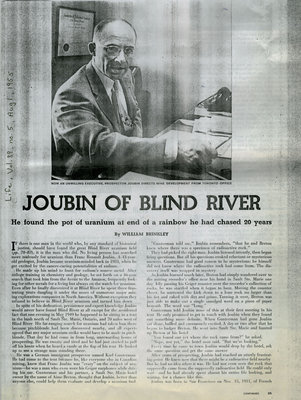