By KEVIN McSHEFFREY of The Standard

BLIND RIVER - At the age when one is expected to relax , 80-year old Alice Desabrais has no intention of taking it easy

Mrs. Desabrais has been an active volunteer with the Blind River branch of the Canadian Diabetes Association for 10 years.

Her dedication to the association got the grandmother of 16 selected as the Heart of Blind River award winner for February.

She started her volunteer work with the CDA 10 years ago when she would accompany her sister-in-law Jean Dupuis to meetings.

Following her work raising eight children, and retiring from the St. Joseph Hospital in 1985, she was left with little to keep herself busy

"They (the CDA) were looking for volunteers, and I had nothing to do," says Mrs. Desabrais.

Four years later she got a better understanding of what diabetes patients must endure when she too developed the disease.

After deciding to volunteer for the group, she staffed the CDA office three days a week for five years until it closed two years ago.

Why does someone at 80 volunteer?

"I enjoy it," she says and adds that it gets her out.

"I want to be where people are. I guess I'm nosy," she says with a grin.

But while she enjoys working with the CDA, it doesn't occupy enough of her time.

She plans to add more volunteer work to her agenda by volunteering for another group while maintaining her work with the CDA.

Janet O'Link, president of the Blind River CDA, is awestruck by the energetic mother of eight.

"And she never misses an event."

She adds that Mrs. Desabrais demonstrates that there are no age boundaries when it comes to giving to help others.

Both women are pleading for more volunteers to join their ranks.

With the aging and diminishing number of volunteers in the future, the needed work might not get down.

Currently, O'Link and Desabrais are the only volunteers on the local CDA board

Some have left to take jobs out of town and others no longer have time.

"It's hard. And many feel they don't have diabetes, so they don't join," Mrs. Desabrais says.

She still has a lot of the energy to go around, enough that she shovels her own walkway.

"I know I'm a senior, but I don't feel like one. I don't know what being a senior feels like. As far as for me, I feel good."

Alice Desabrais has been a volunteer with the diabetes association for 10 years.

"They (her children and her doctor) tell me I shouldn't shove1 but somebody has to do it." Mrs Desabrais says anyone interested in joining the CDA can call her at 356-7882 or Janet O'Link at 356-1257 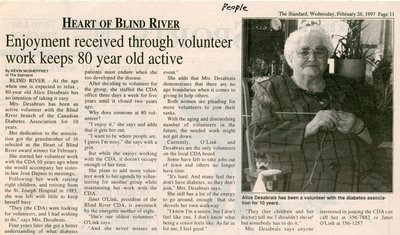