Mystery Question
Can you identify any of the children in this photo?
[Please answer by clicking on the Comments tab]
Creator
McMahon, Gordon, Photographer
Media Type
Image
Item Type
Photographs
Description
A black and white photograph of the Viscount Greenwood Chapter of the imperial Order of the Daughters of the Empire (I.O.D.E.) operating a summer day camp at Camp Hood on the east side of Cochrane Street between Rossland Road and Taunton Road. This photograph shows a group of children who were swimming. Among the group of children swimming in Lynde Creek are Mary Channen; Joanne Strowger and Ann Channen.
Notes
The Imperial Order Daughters of the Empire was founded in 1900 by Margaret Polson Murray of Montréal, who envisioned an organization of women devoted to encouraging support for Canadians departing to fight with the Empire forces in South Africa. The first chapter was formed on January 15, 1900 in Fredericton, New Brunswick. The next month in Montreal, a draft constitution and the aims and objectives of a national organization were reviewed. The head office moved to Toronto in 1901 and the federation was incorporated as Imperial Order Daughters of the Empire and Children of the Empire Junior Branch. The organization was actively involved in supporting Canada’s efforts on behalf of Britain and the allies during the First and Second World Wars. The name I.O.D.E. was officially adopted during the 1970’s.
Date of Original
c.1946
Dimensions
Width: 8 cm
Height: 6 cm 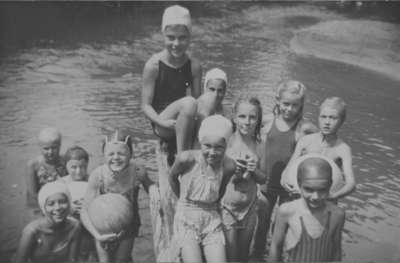