Creator
Unknown, Photographer
Media Type
Image
Item Type
Postcards
Description
A black and white portrait photograph of Corporal Charles Rycroft.
Notes
This photograph appears on the back of the twentieth leaf of Alex Brown's album. There are four photos on this leaf. The top left photo is of Ray Wilson. The top right photo is of Cpl. Chas. Rycroft. The bottom left photo is of an unidentified soldier standing in a building (barrack?) that says P 53C. At bottom right is a photo of Lindsay "Red" McCoy.

Charles B. Rycroft was born in Whitby and still lives in Whitby to this day. He served in the Second World War as an instructor and later in the Royal Canadian Air Force (R.C.A.F.). He worked at the Bank of Commerce at Whitby and Oshawa. He was sales manager and later President of Pal-o-Pak Insulation Co. Whitby and worked there from 1951 to the 1970s. He was Mater of the Composite Masonic Lodge, Whitby in 1957 and District Deputy Grand Master from 1961 to 1962. He was President of the Whitby Rotary Club from 1962 to 1963. He was a member of the Whitby District High School Band from 1965 to 1966. He also was President of the Whitby YMCA from 1972 to 1974. He was an active member of All Saints' Anglican Church and helped start a Boy Scout group at the church. He was a Director of the Whitby Chamber of Commerce and served as the Ontario Civilian Commissioner of Police Services. 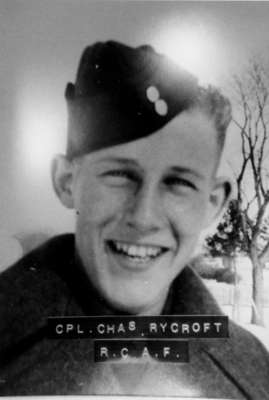