Inscriptions
Soldier Returns
TPR. O. ST. PIERRE
Who arrived home on Tuesday of this week along with a number of other Whitby men, after serving overseas since June, 1941, during which time he saw service in Italy as well as France, Belgium and Germany. Tpr. St. Pierre, whose parents, Mr. and Mrs. I. St. Pierre reside at 424 Perry St., enlisted with the Ontario Regiment at the outbreak of war and trained at Oshawa and Camp Borden prior to proceeding overseas in June, 1941. He wishes to thank all the Whitby organizations for their kindnesses to him during his period overseas. He has two brothers in the armed services, Sergeant St. Pierre, also with the Ontario Regiment, and another brother in the R.C.A.F.
Date of Original
c.1941
Dimensions
Width: 10 cm
Height: 15 cm 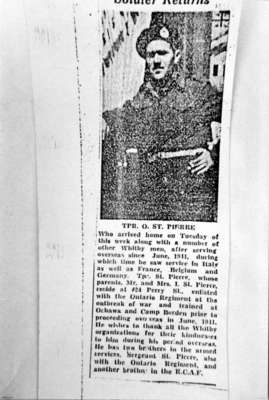