Creator
Unknown, Photographer
Media Type
Image
Item Type
Photographs
Description
A black and white photo of a newspaper clipping with headline "ON ACTIVE SERVICE: Brief Paragraphs of Whitby and District Men Who Have Enlisted in Service of King and Country."


Inscriptions
ON ACTIVE SERVICE
Brief Paragraphs of Whitby and District Men Who Have Enlisted in Service of King and Country.
Stouffville Tribune last week carried a pirture [sic] of Robert Holman, of Claremont, who is serving with the Ontario Regiment (Tank). Bob is a son of Mr. and Mrs. Harry Holman, of Whitby, and attended school at Markham. He has been a resident of Clarement of a number of years where his wife now resides.
The combined pre-war and post-war service with home and overseas service in Canadian military units of three well known Whitby men members of one family, George L. Brown, William H. Brown and John L. Sheridan is 65 years - a unique record and one that would be hard to beat anywhere. John L. Sheridan has 25 years service to his credit. He served for three and a half years in the last great war. His pre-war service was with the Ontario Regiment, and for a number of years he was C.S.M. of the local company, retiring with that rank. But for the fact that he is now physically unfit, he would be wearing His Majesty's uniform today, ready to fight for his country's freedom and protection. George Brown, now with the Ontario Regiment (Tank) has served in the army for 25 years. He served before and after the present war with that regiment, which was at one time the old 34th. He was a C.S.M. of the local company and is today C.Q.M.S. This is his second enlistment on active service. William H. Brown, has seen 15 years with Canada's military units. He served for two years overseas in the last war, and for 13 years without break, he was with the pre-war Ontario Regiment. He was C.Q.M.S. of the local company for six years, retiring from the Regiment with that rank. "Bill" has once again heard the call to arms and has enlisted with the Canadian Postal Corps. now stationed at Ottawa.
______
Pte. Stuart (Pete) Sleeman has joined the King's colours with the Hasting's and Prince Edward Regiment, Picton.
______
Sub-Lieutenant Harry Lade, of the Royal Canadian Navy, is home on 14 days' leave, visiting his home in Brooklin and renewing acquaintances in Whitby.
Date of Original
c.1941
Dimensions
Width: 10 cm
Height: 15 cm 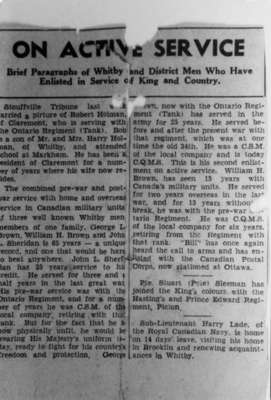