Media Type
Image
Item Type
Photographs
Description
A black and white photograph of Vic Johnston. It is labeled "Vic Johnston" on black tape with gold coloured typeface directly on the photograph. This photograph was on the back of the first leaf of Alex Brown's album and located in the top left pocket. This leaf had 4 pockets for photos on each side. In the top left pocket was this photo of Vic Johnston. The top right photo was of "Pte James Palmer". At bottom left is "Bill Brown" and bottom right "Harold Boys".
Notes
Alex Brown is a local Whitby area veteran. He is a member of the Royal Canadian Legion.

Victor William Johnston was born at Reach Township, Ontario in 1894 and died at Whitby on April 15, 1952. He was buried at Mount Lawn Cemetery, Whitby. During the First World War he serve in the 116th Battalion and 19th Battalion as a corporal machine gunner. He was Steward at Whitby Legion Hall from 1944-1952. Later he became President of the Royal Canadian Legion, Whitby Branch 1941-1942 and helped build Whitby Legion Hall 1943-1944. He was a member of Vimy Ridge Orange Lodge and Whitby Volunteer Fire Department from 1937-1949.
Date of Original
c.1916
Dimensions
Width: 10 cm
Height: 15 cm 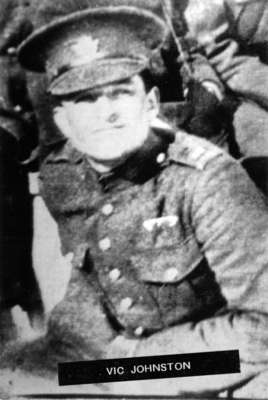